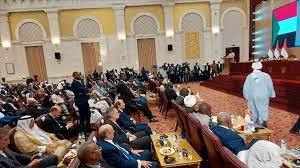 Egypt welcomed the signing of a political framework agreement on the transitional period in Sudan on Monday.

It stressed in a statement issued by the Ministry of Foreign Affairs that this agreement is an important and pivotal step to establish the principles related to governance structures in Sudan.

Egypt also expressed its full support for the agreement and its readiness to cooperate with the various Sudanese parties in their efforts to reach a final agreement that would fulfill the aspirations of the brotherly Sudanese people and strengthen Sudan’s role in supporting peace and stability in the region and Africa.

Moreover, it emphasised its sincere hope that the agreement would represent the beginning of a new phase of stability and prosperity for the Sudanese people in light of the historical ties between the two brotherly countries and the destiny that unites the peoples of the Nile Valley.

On this occasion, Egypt called on the parties of the international community to provide all elements of support to Sudan to enable it to successfully pass through the transitional period and to serve the interests of the Sudanese people across the spectrum.

The political framework agreement between the military component and the Central Council for Freedom and Change was signed on Monday at the Presidential Palace in Khartoum amid a huge local, regional, and international presence.

The agreement comes amid hope that it will solve the complex crisis that Sudan has been embroiled in for more than a year. As revealed by the forces of the Declaration of Freedom and Change — the civil party that signed the agreement — the most prominent articles of the agreement are:

The signatory groups hope the deal will resolve the crisis, while opponents say it ignores fundamental issues and opens the door for the entry of forces that previously supported the Muslim Brotherhood regime, which was toppled by a popular revolution in April 2019.