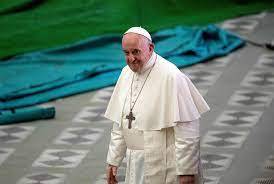 The Kremlin welcomed on Monday the Vatican’s announcement of mediation to resolve the Russian-Ukrainian War.

On Friday, Pope Francis announced that the Vatican is ready to do anything possible to mediate and end the conflict between Russia and Ukraine in statements to the Italian newspaper La Stampa, calling on all parties to not give up.

“Everyone must commit to disarming hearts, starting with their own, and then defusing and disarming violence,” the pope said.

“We should all be peaceful…We want peace, not just a truce that might just lead to rearmament… True peace is the fruit of dialogue.”

Speaking about the war in Ukraine, he continued: “We have been seeing images of destruction and death for months,” noting that “peace within justice is a prerequisite for a decent life, which allows us to build a better future together, adding that the world does not need empty words, but convinced witnesses and peacemakers open to an inclusive dialogue.”

According to Vatican Radio, the pope said there is no doubt that we are living a third World War.

This was not the only time that the pope called for mediation to resolve the crisis between Russia and Ukraine.

Previously, he called for mediation in June and February, expressing his readiness every time to travel to Ukraine if needed.