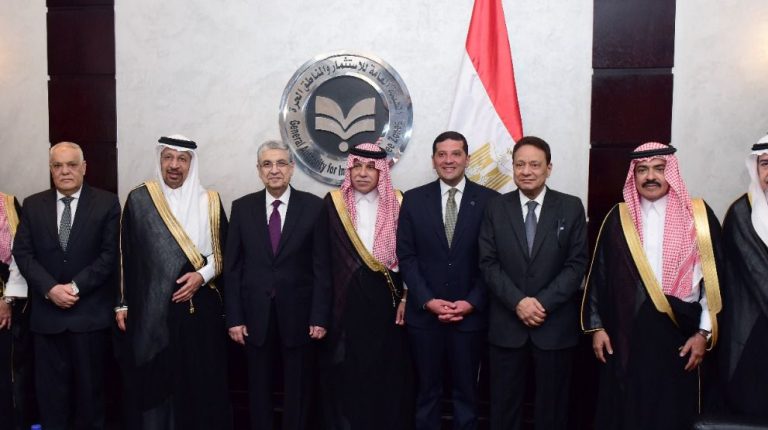 Agreements and memoranda of understanding were signed between Saudi investment groups and Egyptian governmental and private agencies, in the presence of the ministers of trade and investment from Saudi Arabia, the chairperson of the Federation of Saudi Chambers, and the chairperson of the Egyptian-Saudi Business Council, in addition to representatives of more than 60 Saudi institutions and companies.

CEO of GAFI Mohamed Abdel Wahab said the new agreements represent a qualitative upgrade in the investment relations between the two countries, not only in terms of financial value, but in terms of added value to the economies of the two countries, to support the infrastructure, logistical, and technological sectors.

He stressed that the agreements are a reflection of the strength of the historical and economic relations that bind the two brotherly countries. He also pointed out that the “State Ownership Document” announced by Prime Minister Mostafa Madbouly emphasized the state’s keenness to create equal opportunities, enhance competition mechanisms, and empower the private sector.

Abdel Wahab explained that GAFI will do its part to support Saudi investment projects and remove all challenges to their implementation, as the golden license will be granted to companies that establish strategic or national projects.

Majed Al-Qasabi, Saudi Minister of Trade and Industry, said that Egypt is experiencing an unprecedented era in terms of the investment environment, as the volume of trade exchange between the two countries has risen to $14.5bn.

On the sidelines of the signing ceremony, he added that the number of Egyptian companies present in Saudi Arabia is about 750 companies with a capital of $1.2bn, while the number of Saudi companies in Egypt is about 6,285, with a total investment of $30bn.

Khaled Al-Falih, the Saudi Minister of Investment, said that the electricity sector in Egypt is an important hub for the Kingdom of Saudi Arabia due to its abundance, which encourages investment and stimulates the growth of the Egyptian economy.

He noted that Saudi investors have a desire to invest in the energy and petroleum sector, within the framework of promoting economic integration between the two countries and under the direction of Mohammed bin Salman, the Saudi Crown Prince.

He mentioned that the Kingdom of Saudi Arabia is a large and influential investment power in the Arab world, and therefore considers it necessary to support the Egyptian economy.

He pointed out that the total Saudi investments in Egypt amounted to SAR 110bn distributed in a large number of industrial, real estate and infrastructure sectors.

He called on Egyptian real estate companies to contribute to the projects implemented by the Kingdom of Saudi Arabia during the current period, promising to provide incentives to willing companies.

Ajlan Al-Ajlan, Chairperson of the Federation of Saudi Chambers, said that the agreements come within the framework of consolidating economic relations between Egypt and Saudi Arabia, as well as enhancing cooperation between Saudi and Egyptian business owners.

Al-Ajlan added that relations are capable of growth and expansion, especially as the two countries enjoy many competitive advantages that must be taken advantage of.

He stressed that the Saudi-Egyptian Business Council contributed to increasing relations and developing inter-economic relations, benefiting from the support between the two countries.

He added that there must be support between the two sides to identify investment opportunities, launch initiatives and create strategic partnerships between the two countries to develop their regional role in the region.

ACWA Power signed an agreement with the Egyptian Electricity Holding Company to produce wind energy with a capacity of 1,100 MW.

Saudi Arabia-based alfanar signed two agreements, the first with the Arab Organization for Industrialization to produce wind energy and green hydrogen, and the second agreement with Benya Group in the field of information technology and digital solutions.

Ajlan & Bros Holding Group signed several investment agreements with the Egyptian side, in the fields of petroleum products, infrastructure, renewable energy, logistics, food industries, food security, pharmaceutical industry, automobile industry, and entertainment industry. Hassan Allam, the Arab Group for Supply Chains, and Arise for Ports and Logistics, to develop, finance and operate a multi-purpose terminal within the port of Damietta.