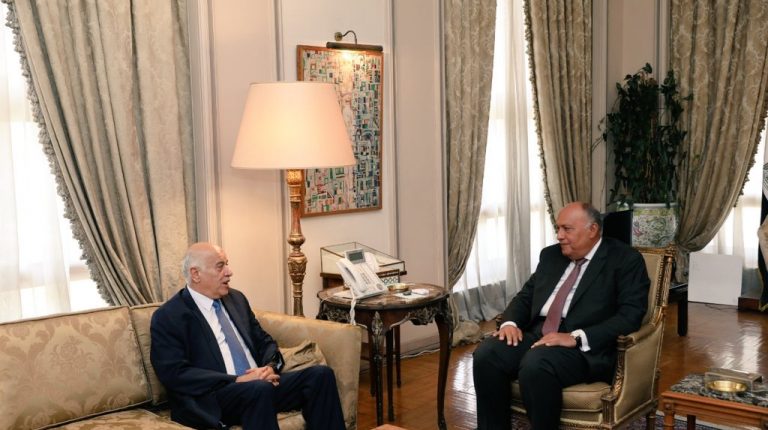 Foreign Minister Sameh Shoukry received, on Sunday, Jibril Rajoub, Secretary of the Central Committee of the Fatah Movement, in Cairo.

Ahmed Hafez, spokesperson for the Ministry of Foreign Affairs, said that Rajoub briefed Minister Shoukry on the most prominent challenges in Palestine, and the recent increase in violence in the occupied Palestinian territories, as well as violations against Al-Aqsa Mosque and other religious shrines.

Shoukry stressed the need to stop any measures or practices targeting the Arab Islamic and Christian identity of Jerusalem and its holy sites, warning of the consequences of this on the stability of the Palestinian territories.

Minister Shoukry also reiterated that the continued expansion of settlement activity, whether through the construction of new settlements or the expansion of existing ones, as well as the confiscation of land and the displacement of Palestinians, undermines the prospects for a two-state solution and the prospect of a comprehensive and just peace in the region.

Shoukry stressed Egypt’s firm position on supporting the Palestinian cause and the legitimate rights of the brotherly Palestinian people, and the importance of working to create an appropriate climate to revive the path of negotiations between the Palestinian and Israeli sides towards the establishment of an independent Palestinian state on the 1967 borders with East Jerusalem as its capital.