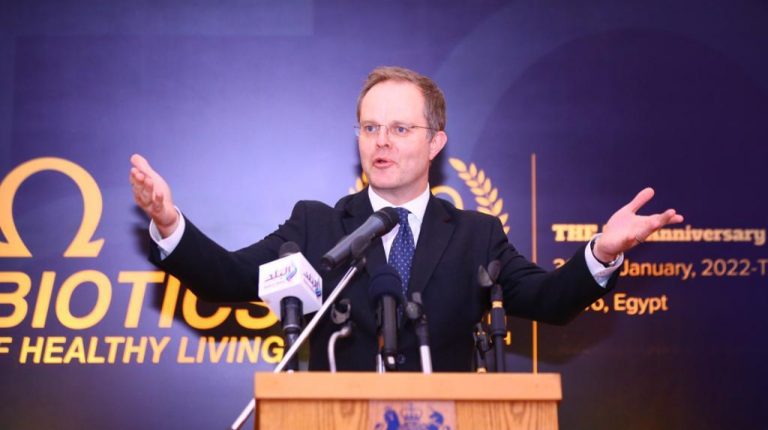 The British Ambassador to Egypt Gareth Bayely and The Executive Leadership of Vitabiotics Egypt arranged a networking reception to celebrate 50 years of Vitabiotics’ innovation and leadership in the vitamins industry.

“I was delighted to host the 50th Anniversary celebration for Vitabiotics, the UK’s number 1 vitamin company. Vitabiotics has both a developmental and economic footprint in Egypt and is investing more than EGP 100m to upgrade its manufacturing site to accommodate future expansion, with plans to launch more than 20 products to the Egyptian market in the coming years. This is a perfect example of how our strong UK-Egypt trade links can drive economic growth, job creation, and improve people’s lives,” said The British Ambassador to Egypt, Gareth Bayley
The event hosted guests from different fields and bodies in Egypt; government ministers, government officials, universities’ presidents, facilities deans, public figures, medical doctors, community leaders and top journalism agencies were among the gathering.

During the event, Vitabiotics representation from the global team and the affiliate in Egypt, addressed the vision, the science behind and accomplishments in the UK and worldwide that allowed Vitabiotics to redefine the global nutraceutical market. During his talk, Vitabiotics Global Vice President Dr. Rohit Shelatker, spotted on the outstanding success in Egypt during the past 8 years. “Vitabiotics is not only the UK’s number 1 vitamin company, but also the number 1 vitamins, minerals, and supplements company in Egypt. Growing to capture 12% market share of the local nutraceutical market in Egypt in such short period of time is phenomenal,” he stated.

In Egypt, Vitabiotics operates on an EGP 1bn in turnover with over 15 million units of the available range of their products. During the event, the CEO of Magicpharma Dr. Sherif Rashed addressed the upstream dimention of Vitabiotics in Egypt that puts patient at the center of operations. “I believe being the biggest supplier of multivitamins in Egypt is not only about numbers Since we began operating in Egypt in 2015, we adopted the profound definition of Serving and caring being a scaled contributor to the healthcare system, we accepted more upstream approach to health which allowed us to empower social support and education and not to limit ourselves only to the downstream of treatment and medication,” he added.

Vitabiotics Egypt is one of the biggest advocates in the private sector with a proven support to the woman in Egypt. Women healthcare and healthy child development is the center of their focus despite the wide range of products that satisfies the needs of all family members.

During the event, Vitabiotics launched the Rehlet Hamel (The Pregnant woman Journey) initiative in Egypt with Cooperation with governmental and non-governmental institutions is Egypt.
“As the leading Vitamins company in the UK and Egypt we will continue to focus on antenatal care, child health, health awareness, and promotion at all demographical and social levels. Building on our assets to support the fetal programing for pregnant women in Egypt while minding the mental and psychological aspect as well,” Rashed stated.
Rehlet Hamel is multidimensional program that tackles the health of the pregnant women and their child. It will enable thousands of pregnant women to early mitigate any health issues for the mother and her baby to born either related to malnutritional or different health conditions common during pregnancy.
Vitabiotics is planning to self-fund screening for almost 10% of pregnant women with more than 300,000 patients during 2022 and to provide technical support, education, screening and awareness to empower women in her most critical phase in her life and support the birth of a healthy children for our future.