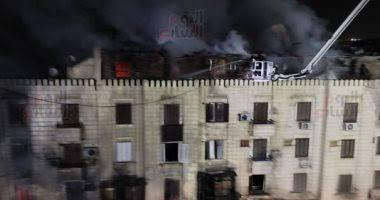 The Ministry of Health and Population announced that 11 people suffocated in a fire that broke out on Sunday in a three-storey building in the Al-Hussein neighbourhood in Cairo.

Spokesperson for the Ministry of Health and Population Hossam Abdel Ghaffar explained that as soon as the fire was reported, 10 ambulances were dispatched, confirming that all the injured were transferred to Al-Hussein University Hospital and that they all received the necessary treatment and medical care.

He stressed the readiness of all hospitals in the neighbourhood, affirming the availability of all drugs and medical supplies as well as blood and plasma bags to care for the injured.

Investigations by the Public Prosecution indicated that the fire started on the first floor then spread to the rest of the building. The investigation is yet to reveal the reason behind the blaze.

Eyewitnesses said that the fire started at one of the shops in the building then spread in a short time to the three floors, with many trying to douse the flames and failing before the fire department arrived and handled the situation.