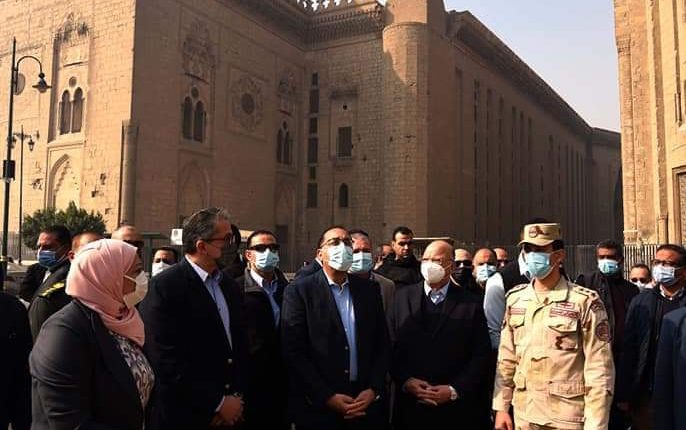 Egypt’s Prime Minister Mostafa Madbouly directed to quickly restore buildings of an archaeological nature in the Islamic Cairo area and to continue unifying the facades on buildings at Al-Moez Street to give a visual identity to this distinguished site.

His remarks came during his inspection tour to follow up on a number of development projects to restore Historic Cairo.

He stressed the government’s keenness to develop these important historical areas and display their historical value in order to become a tourist destination for visitors.

The Prime Minister began the tour from the area surrounding Al-Hakim Mosque, he inspected the development works in the area, which included developing the facades for 48 buildings, 10 of which had been completed.

Madbouly also followed up on a project to establish a historically styled tourist hotel at Wekalet Al-Shorbagy, which will provide a distinctive experience of accommodation for those wishing to visit this region and learn about the secrets of its civilisation. The hotel will include 28 hotel rooms as well as 10 hotel suites.

He also directed to quickly pay compensation to the eligible owners of the ruined buildings that will be removed.

The prime minister also inspected the progress on the development of the Cairo Citadel Aqueduct, which is scheduled to be completed by March 2022. Restoring the aqueduct is an attempt to foster Islamic-style tourism and implement a cultural and entertainment project that includes theatres, cinemas, hotels, and commercial malls in the area.

Cairo is one of the most important and largest historic cities in the world; it is a lively city characterised by the richness of its urban fabric as well as the multiplicity of monuments and historical buildings that reflect its long history as a political, cultural, commercial and religious capital of the Middle East and the Mediterranean basin.

The city is also a distinct model of Islamic architecture, as it collected unique architectural examples from the Umayyad, Tulunid, Fatimid, Ayyubid, Mamluk, and Ottoman eras.