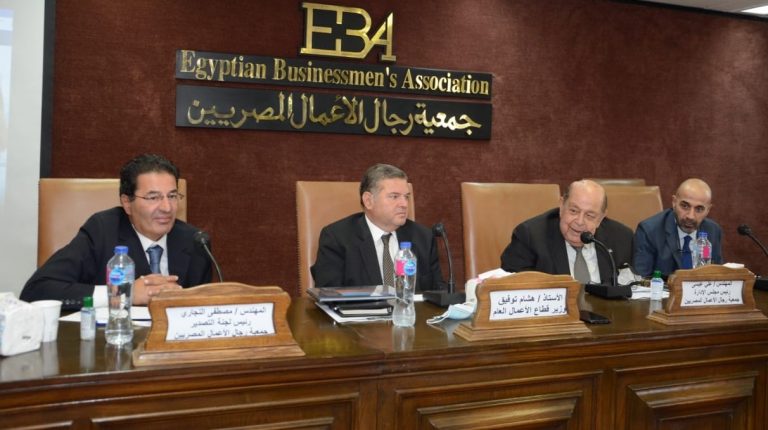 Minister of Public Enterprises Sector, Hisham Tawfik, has announced that 98% of the boards of directors at 118 affiliated companies have been changed.

He made this statement during a symposium organized by the Egyptian Businessmen Association, on Monday, to introduce the electronic catalogue of Egyptian products, with the aim of promoting Egyptian products in African and international markets.

He added that consulting companies have been assigned to follow up the performance of the Ministry-affiliated companies.

The Minister also stated that an integrated study was conducted to address the performance of companies, especially as the private sector enters the competition. He noted that more than one board of directors was changed to achieve the required growth rates.

The minister revealed that it is scheduled to open 14 centres in major commercial centres around the world using professional promoters to market Egyptian products through the e- catalogue, in addition to opening two centres in East Africa in cooperation with the private sector. Six of these centres will be opened early this year, and the rest in June 2022. The target is to register 30,000 products in the catalogue mid next year.

He added that “Gosoor” project – which aims to boost intra-trade between Egypt and other African countries – provides a package of transport and logistics services to exporters and importers dealing in foreign trade. Moreover, there are ongoing efforts taking place to operate two shipping lines to East Africa and Northwest Europe, with the help of the National Shipping Company, which owns the largest fleet raising the Egyptian flag, as it will be supported by four new ships.

With regard to electric vehicles, the minister referred to the electric car production project at Nasr Automobile, the manufacture of mass transit vehicles of different sizes to operate with gas and electricity at the Engineering Automobile Company. He also alluded to efforts to provide infrastructure for electric vehicles, including energy pricing, in cooperation with the Ministry of Electricity, as well as establishing and managing public charging stations for electric cars in cooperation with a sovereign authority. Within two years, 3,000 double stations are scheduled to be established to charge 6,000 cars at the same time.

In the pharmaceutical sector, he indicated that a memorandum of understanding (MoU) will be signed soon with an international company to manufacture some pharmaceutical products for local consumption and export, in addition to a project to comply with the requirements of good manufacturing by drug production companies.