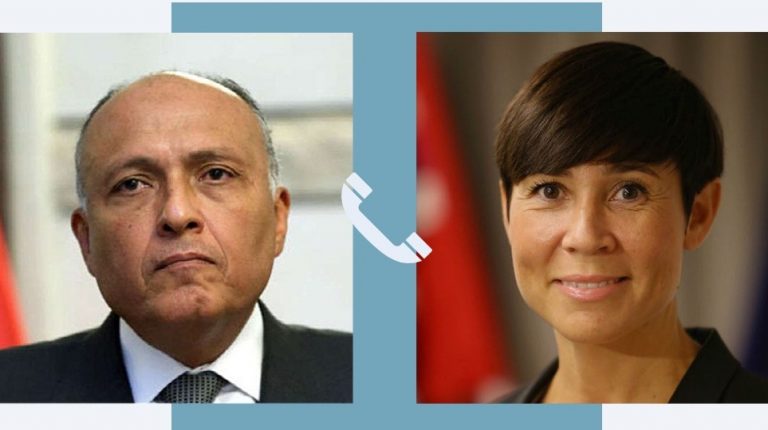 Egypt’s Minister of Foreign Affairs Sameh Shoukry received, on Monday, a phone call from his Norwegian counterpart, Ene Eriksen Soreide, in which they discussed ways to advance and develop cooperation in many fields, as well as the latest developments on the regional and international arenas.

Ahmed Hafez, the spokesperson for the Ministry of Foreign Affairs, stated that the contact included discussions on ways to continue advancing bilateral relations between the two countries, especially in the field of Norwegian investments and participation in national projects in Egypt.

They also agreed to continue consultations in order to continue coordination between the two sides regarding bilateral files and issues of common interest.

The contact also touched on recent developments in the region, especially at the level of the Palestinian issue, where the Norwegian Minister invited Minister Shoukry to participate in the meeting of the Liaison Committee on Coordination of International Aid to the Palestinian People (AHLC),

The Committee is scheduled to be held in New York on the sidelines of the upcoming meetings of the United Nations General Assembly, in support of the Palestinian people and within the framework of efforts to provide aid and development support to all parts of the Palestinian territories, especially with the important role that Norway plays in the framework of the work of the AHLC.