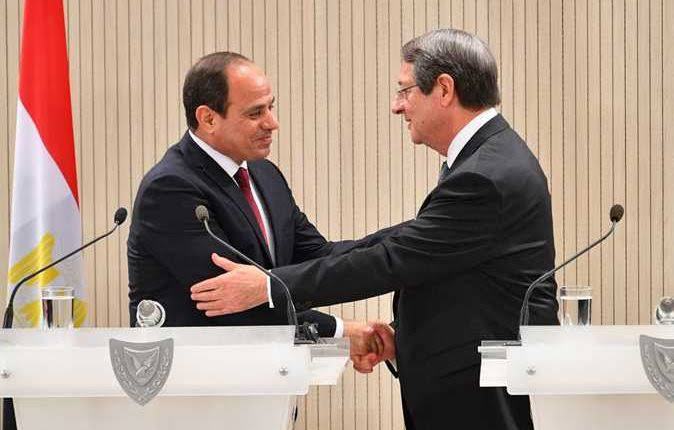 Al-Sisi’s remarks came during a joint press conference with his Cypriot counterpart Nicos Anastasiades at Al-Ittihadeya Presidential Palace in Cairo.

Both leaders exchanged viewpoints on issues of common interest, and discussed further strengthening the cooperation between the two countries, which will achieve common interests of both sides and contribute to achieving stability, security, and prosperity for both peoples.

During his visit to Cairo, Anastasiades participated in the first meeting of the High Governmental Committee between Egypt and Cyprus.

Al-Sisi affirmed Egypt’s solidarity with Cyprus to face any practices that would prejudice Cypriot sovereignty or attempts to impose a new fait accompli in violation of Security Council resolutions, and in a manner that undermines the chances of reaching a settlement of the Cyprus issue on the basis of the island’s unity, and the frameworks agreed upon by the international community to resolve the dispute.

He said that Egypt supports the Cypriot cause, which is consistent with United Nations resolutions, and the need for non-interference in the affairs of countries and respect for their sovereignty.

The High Governmental Committee between Egypt and Cyprus was held for the first time at the presidential level.

During the meeting, the leaders affirmed their intention to continue cooperation among themselves and Greece, and the need to work to achieve maximum benefit from this cooperation mechanism, representing a role model at the regional level in terms of interdependence and cooperation.

The two leaders held a session of bilateral talks, followed by the meeting of the Higher Governmental Committee, where President Al-Sisi welcomed the Cypriot President and the ministerial delegation accompanying him in Egypt.

In continuation of strengthening relations with partners in the Mediterranean region, the President of Cyprus agreed on the importance of strengthening the existing mechanism of tripartite cooperation between Egypt, Cyprus and Greece to continue political coordination.

The meeting included discussions on developments on the regional political arena, in the Eastern Mediterranean and at the international level, especially in light of the common challenges facing the two countries.

Moreover, President Al-Sisi further briefed the Cypriot President on Egypt’s ongoing efforts to reach a just solution to the Ethiopian Dam crisis, and our efforts to resume negotiations to reach a legally binding agreement to fill and operate the dam, stressing the importance of informing the international community of a serious role in this file in order to preserve the stability of the region.