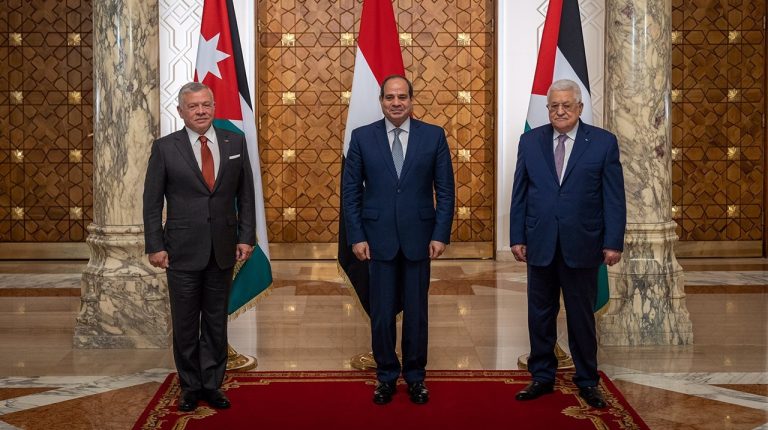 The Egyptian-Jordanian-Palestinian summit affirmed the firm stances of supporting the Palestinian cause against any unilateral changes on the ground that would hurt the right of the Palestinian people to obtain their independent state with East Jerusalem as its capital.

The summit which was held in Cairo on Thursday called for the necessity of uniting all efforts to work on reviving the peace process and resuming negotiations. It cited the grave consequences of not solving the Palestinian issue on the security and stability of the region as a whole.

At the forefront of these rights is his right to embody his independent, sovereign state on the lines of June 4, 1967, with East Jerusalem as its capital, under international law, relevant international resolutions and the Arab Peace Initiative.

The leaders affirmed that just, comprehensive and lasting peace is a strategic option and a necessity for regional and international peace and security.

They affirmed their rejection of the illegal Israeli measures that undermine the two-state solution and threaten the chances of achieving peace in the region. These measures include the construction and expansion of settlements in the West Bank and East Jerusalem, land confiscation, house demolitions, and the displacement of Palestinians from their homes.

In this context, they stressed the need to respect the rights of Sheikh Jarrah’s people in their homes.

The Egyptian-Jordanian-Palestinian summit stressed the need to preserve the historical and legal status quo in Jerusalem and its Islamic and Christian sanctities, and to reject all practices aimed at compromising this status.

The leaders discussed the developments of the political and field situation in the Palestinian territories following the latest escalation in May 2021.

They reiterated the need to stop the practices that led to this escalation in East Jerusalem and the Al-Aqsa Mosque and stressed the need to work to maintain calm.

The leaders welcomed the efforts made by Egypt to consolidate the truce and reconstruction in the Gaza Strip.

They called on the international community to exert its efforts to alleviate the humanitarian crisis in the Gaza Strip, by participating in the reconstruction efforts and urged Israel to respond to the basic and humanitarian needs of the people of the Strip, in line with its responsibilities per international law.

The leaders stressed the importance of continuing to work to achieve Palestinian national reconciliation.