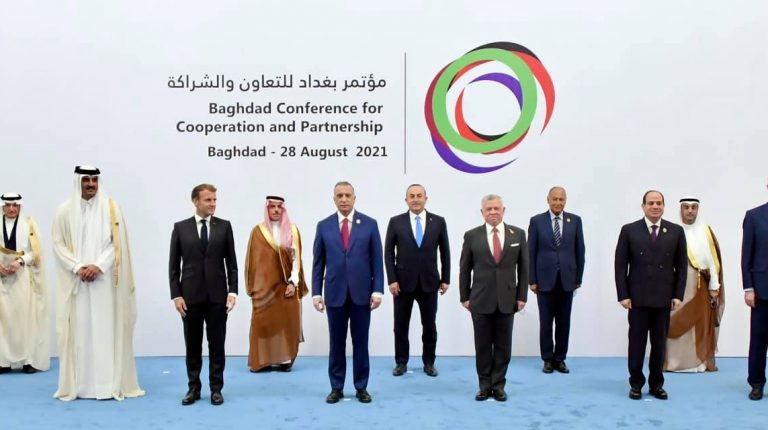 Egypt’s President Abdel Fattah Al-Sisi affirmed his country’s rejection of any interference in Iraq’s internal affairs, and extended his support to Iraq in achieving stability, preserving its territorial integrity, and restoring its important role in the region.

During his participation in the Baghdad Conference for Cooperation and Partnership in Iraq on Saturday, Al-Sisi said that Iraq faced the very negative effects of terrorism and wars which brought suffering to the region. However, the president expressed his confidence in Iraq’s success in holding the upcoming elections.

He also called upon the Iraqi people to build and reconstruct their country, and to cooperate for a better future.

“The people who have this honourable history and this ancient civilization undoubtedly have a promising future thanks to their sons, and the hope and motivation towards achieving a better future,” said Al-Sisi.

He stressed that Egypt is keen on Iraq’s advancement and welcomes to exchange its expertise in various fields with Iraq, “out of a belief that both countries share the same destiny and goal.”

On Saturday morning, Al-Sisi was received in Baghdad by Iraq’s Prime Minister Moustaf Al-Kadhimi to participate in the meeting of Iraq’s neighbouring countries to discuss cooperation, countering terrorism, and easing tensions in the Middle East.

Nine countries, mostly from the regional neighbourhood of Iraq, in addition to Arab and international organisations, participated in the one-day meeting.

On the sidelines of the conference, Al-Sisi met with his Iraqi counterpart Barham Salih, who stressed Iraq’s keenness to continue intensive coordination and consultation with Egypt at all levels, in light of the strong relations that unite the two countries.

For his part, President Al-Sisi affirmed Egypt’s pride in the historical relations with Iraq, and its keenness to strengthen its Arab national role, as well as providing full support to the Iraqi people in all fields.

The meeting witnessed a review of the overall joint bilateral relations between the two countries, as well as ways to enhance areas of economic, commercial and investment cooperation, in addition to discussing the executive position of the projects agreed upon within the framework of the tripartite cooperation mechanism with Jordan.

Moreover, Al-Sisi met with Emir of Qatar Sheikh Hamad bin Khalifa Al-Thani, as both leaders touched on the relations between the two countries.

They hailed the latest improvement in the relations between Cairo and Doha, and agreed on the importance of continuing consultation and working to advance ties between the two countries during the next stage.