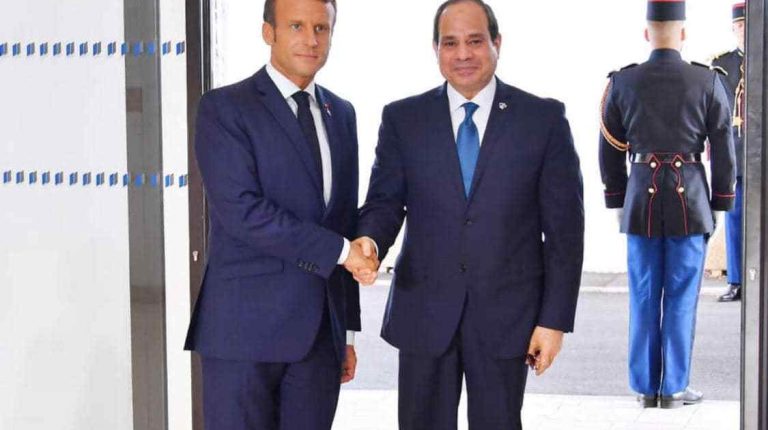 Egypt’s President Abdel Fattah Al-Sisi arrived, on Sunday, in France to participate in the Paris Conference to Support the Transition in Sudan and the Summit on Financing African Economies, which will be held on 17 and 18 May, respectively.

Egyptian Presidency spokesperson Bassam Rady stated that Al-Sisi’s participation comes upon the invitation of France’s President Emmanuel Macron, as Egypt is one of Sudan’s important supporters in its democratic transition.

Al-Sisi was received by several politicians and diplomats upon arriving in France.

It also looks to review the ongoing Egyptian efforts in this regard at various economic, political, and security levels.

Al-Sisi will also shed light, during the African Economies Financing Summit, on various topics of concern to African countries. This particularly relates to the importance of strengthening international efforts to facilitate their integration into the global economy, in a way that contributes to achieving economic growth. The Franco-African summit is set to take place under the slogan “Financing African Economies”.

The focus here is to achieve such growth despite the repercussions of the novel coronavirus (COVID-19) pandemic, and facilitate the transfer of technology to African countries.

Rady added that Al-Sisi’s visit to France includes a summit with his French counterpart to discuss issues of bilateral relations. This is in addition to continuing consultations and mutual coordination on a number of relevant regional and international files.

Meanwhile, Al-Sisi is also scheduled to hold a number of meetings with French officials and heads of some international French companies. These meetings will take place to discuss ways to boost cooperation in the economic, trade, and investment fields between the two sides.

On the sidelines of the visit, the Egyptian President will meet with a number of heads of state and government officials. During the meetings, discussions will take place on advancing the frameworks for bilateral cooperation and consultations on various regional and international issues.

Egypt’s Ambassador to France Alaa Youssef affirmed Egypt and France’s identical views regarding issues of development, economic recovery, and support for stability and security in the African continent, especially the Libyan crisis.

He noted that the leadership of the two countries are keen to continue coordination and consultation on various regional issues.

In statements to reporters, Youssef said that the two countries have a shared vision towards the Libyan crisis that focuses on the need to restore security and stability. It includes the exit of foreign forces from the country, and holding elections to preserve its sovereignty, independence, and territorial integrity.

He added that Egypt and France hold similar positions regarding Lebanon, with Egypt lending its support to the French initiative to support stability, put an end to the political crisis, and for the Lebanese to form a government.

Youssef pointed out that the bilateral cooperation also focuses on Africa, as the two countries are keen to continue consultations on various issues on the continent, including the Sahel issue, which is of great importance to both Egypt and France.

He noted that Egyptian-French relations had witnessed a remarkable development over the past few years, supported by the exchange of visits between Presidents Al-Sisi and Macron. This saw the building of a strategic partnership between the two countries.

The ambassador said that French companies are currently implementing many projects in Egypt, including the Cairo Metro project and the new Monorail line.

Such cooperation also exists in the tourism sector, which is of great significance to the Egyptian economy, as well as in education and culture. France is in the process of setting up educational facilities in Egypt, with the former also keen to finalise its university project in the country.

He pointed out that the bilateral cooperation in healthcare, which was established many years ago in the form of the Qasr Al-Eini Hospital, has also seen remarkable development.

Youssef pointed out that the French side is keen to support Egypt’s efforts in the health and medical fields, especially through cooperation in efforts to confront the novel coronavirus (COVID-19) pandemic.

Regarding President Al-Sisi’s current participation in the two Paris summits, Youssef said, “France views Egypt as a vital partner in Africa and is always keen to coordinate with it in various fields, and on African Issues.”

He said that France is well aware of Egypt’s weight in Africa, and has several vital messages that it wishes to send to the world.

This includes highlighting its keenness to support stability and security efforts across the continent. Egypt is also using its position and ambitions to enhance its economic growth, and improve the living conditions of Africans.

He pointed out that cooperation with Africa was a top priority for Egypt’s leadership, with the country keen to deliver a message to the international community on extending a helping hand to countries across the continent. This would provide assistance in recovering from the global pandemic.

Youssef added that through the France-Africa summit, Paris seeks to provide support to African economies to recover from the repercussions of the coronavirus pandemic.

He also noted that the summit’s final statement will include implementable proposals and specific timetables to help African countries recover from the global health crisis.

Youssef said that the total volume of French investments in Egypt amounts to €5bn, which the latter seeks to increase in the future. There are additionally more than 165 French companies operating in Egypt, providing about 350,000 job opportunities.

The ambassador also said that Egypt seeks to open many areas for local products in the French market, especially agricultural products. The country will work to increase the volume of its exports to France during the coming period.

Youssef said that the French company Total, one of the largest energy companies in the world, has shown interest in investing in Egypt’s energy field.

Opinion| US presidents between emancipation of slaves and political exploitation

US Ambassador Inaugurates the New American Corner in Alexandria