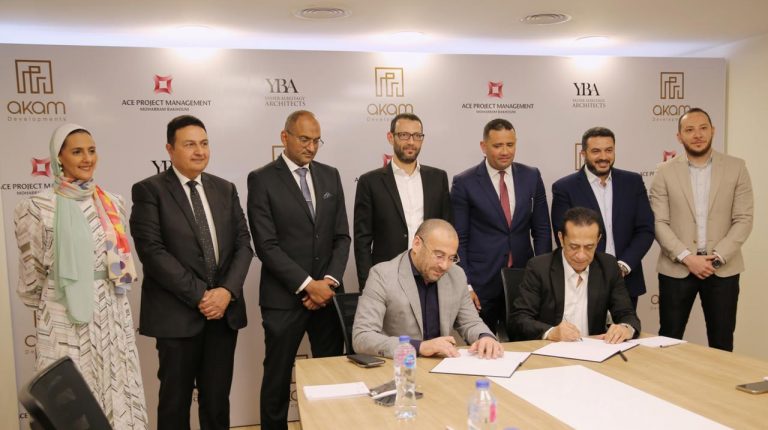 Akam Developments has signed a cooperation agreement with ACE Moharram.Bakhoum, a multidisciplinary engineering consulting company, to supervise the implementation of engineering and architectural designs for its SCENE7 project.

The project, designed by Yasser Al Beltagy Architects (YBA) and which is being constructed over 40 feddans in the New Administrative Capital’s (NAC) R7 district, represents the latest of Akam Development’s development work at the NAC.

Essam Mansour, Chairperson at Akam Developments, said that the agreement’s signing is a strong addition to the SCENE7 project, confirming the company’s vision and strategy and the way it operates in the Egyptian market.

Ahmed Moharram, Vice-Chairperson and Managing Director at ACE Moharram.Bakhoum, said that his company’s joint cooperation with YBA gives great strength and confidence in overcoming any problems the design process may face.

It also boosts the implementation of all project phases, including engineering and architectural designs, and their completion within the timeline.

YBA Chairperson Yasser Al Beltagy said that the contract with Akam Developments is the second joint cooperation relating to the management and design of engineering works and drawings for the company’s projects in the NAC.

Al Beltagy added that YBA took over the design work for Akam Developments’ first project, Scenario, and is currently assuming the role of consultant for SCENE7, the company’s second project.

Hisham Kandil, Technical Managing Director at Akam, said that the company has completed almost 55% of the construction at the Scenario project, and that the first phase will be delivered by the end of the current year.

Kandil noted that the company has already completed about 16% of the construction work at the SCENE7 project, which was launched in the last quarter (Q4) of 2020.

The company aims to direct approximately EGP 950m into construction work at its projects over the current year.

Everything You Need To Know About Bitcoin

Can Bitcoin Replace the US Dollar?