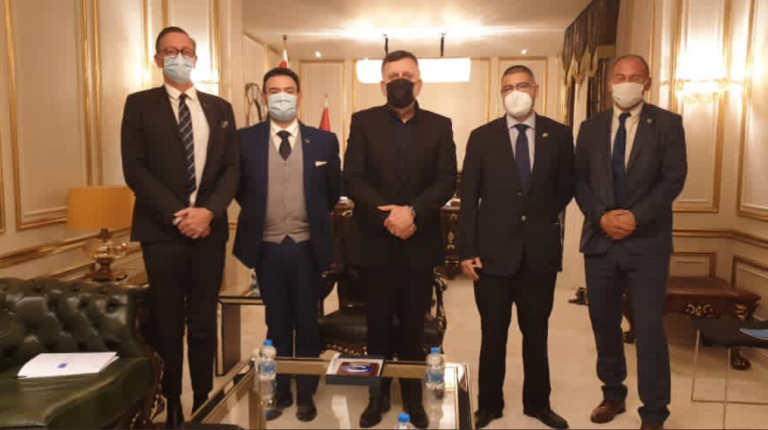 The European Union (EU) expressed, on Tuesday, its full support to the agreement reached by the participants in the Libyan Political Dialogue Forum (LPDF) to hold national elections in December 2021.

The EU also emphasised the need to enforce the arms embargo imposed on Libya, and prevent oil smuggling and human trafficking, Head of EU Delegation to Libya, Sabadell Jose, said.

Jose’s comments came after his meeting with Head of the Government of National Accord (GNA) Fayez Al-Sarraj. The meeting discussed the LPDF outcomes and the EU-Libya security cooperation.

Meanwhile, Jose congratulated the Libyan people on the LPDF progress.

“Agreement on elections is a clear path to much-needed change. Time is now, all must put the interest of the country before their own and be ready to compromise to achieve the peace Libyans demand and deserve,” he said.

Late on Monday, the GNA welcomed the agreement on holding presidential and parliamentary elections in Libya in December 2021.

The GNA announced the allocation of a sum of money for the High National Elections Commission in Libya, pledging to harness all available resources to help it perform efficiently and professionally, according to a GNA statement.

The next elections will be the first in Libya since 2014.

“Reaching elections requires a new executive to unify the country. This means establishing a new and reformed Presidency Council and an effective and unified Government of National Unity, as outlined in the Berlin Conference Conclusions and adopted by UN Security Council Resolution 2510 (2020),” Acting UN Libya envoy Stephanie Williams said.

The LPDF was launched in Tunisia last week with the aim to reach a comprehensive political agreement to end the Libyan crisis.

A total of 75 participants have taken part in the LPDF, all of whom were chosen by the UNSMIL to represent various Libyan parties.

The talks in Tunisia were held in parallel with military consultations in the northern Libyan city of Sirte, aiming to complete discussions over the ceasefire agreement reached late in October and signed by the rival Libyan parties following the UN-facilitated talks in Geneva.

Since the fall of Muammar Qaddafi in 2011, Libya has undergone years of conflict. The oil-rich country has been split between two parties since 2014, the GNA in Tripoli, and the Libyan Arab Armed Forces in Benghazi.