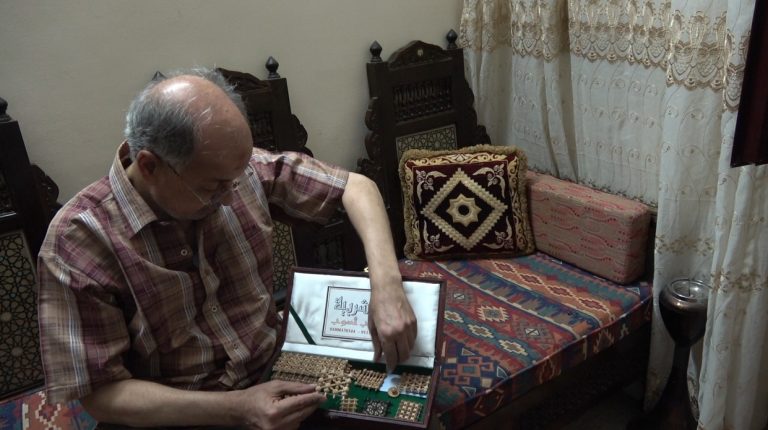 The grand and imposing golden dome of Jerusalem’s Al-Aqsa Mosque has long been an enduring symbol of the Holy Land, alternating between an eye-catching focal point for conflict and of faith.

Its outstanding artistry is also a symbol of the wondrous beauties of Islamic art, with its focus on symmetry and form as an act of worship to the divine.

The mosque, however, has also been a symbol of the turbulent times in the Holy Land. In 1969, a religious extremist burnt down the 800-year-old minbar, or pulpit from which religious sermons are given, all but destroying the priceless historic and religious artefact.

The intricate wooden minbar, considered a gem of Islamic art, was constructed in the 12th Century CE, following Jerusalem’s conquest by Saladin, who gave it his name.

The Saladin minbar has since been replaced by a replica, created by a team of highly-skilled artisans from across the Arab region, with vast experience in Arabesque, the style of craftsmanship in which the minbar was created.

The process was not easy, particularly as there were no designs or an integrated model on which work on the minbar could be based.

Daily News Egypt sat down with Magdy El-Adawy, the only Egyptian Arabesque artist to take place in the minbar’s restoration, to talk about the restoration work. He described how the Islamic world almost lost the secrets of this form of art, which is based purely on Islamic scientific and philosophical principles. He also described in detail how he was chosen to take part in the restoration work.

Tell us how you came to participate in the work at the Al-Aqsa Mosque?

The Jordanian Ministry of Religious Endowments announced a competition to select skilled craftsmen for the work on the Al-Aqsa Mosque minbar, which was burned by a religious extremist.

The ministry established religious endowments committees to undertake a search of those Arab countries which are famous for their mashrabiyya (wooden window box) and carpentry work. They also published an advertisement in Jordan’s official newspaper about the work on the minbar.

Representatives from these committees came to me to see my work, and offered me a place at a workshop that looked at the kind of craftsmanship that would be needed in the project. At the workshop, they hosted a group of artisans from across the region, and took samples of work from those who would carry out the restoration work. The samples were taken back to Jordan, which is entrusted with overseeing Jerusalem and restorations and everything related to Islamic holy sites there.

What other nationalities were present in the working group involved with rebuilding the platform?

There were artists from Syria, Iraq, Morocco, Jordan, and Turkey, who also participated with us. When we went to the mosque, we were a group of not less than 30 people. We were hosted and honoured for the work we were doing.

How long did the preparatory workshops take in Jordan?

Our stay there was for about 20 days, during which time we were provided with all the support and facilities we needed.

How long did the restoration work take?

The Mihrab office, which was supervised by Munawar Al-Muhaid who was responsible for everything related to the platform, took a period of time to carry out the drawings, and examine the materials needed.

There was also some travel abroad involved, to analyse the materials that would be used in the restoration, until the project reached the final designs stage. From this point onward, it took about 18 months for the work on the minbar to take place.

Before that period, there was a tremendous amount of work and effort being carried out at the Mihrab Office to give the minbar, and its appearance, the best treatment possible. The minbar came out even better than we had imagined, and it is a real architectural masterpiece. The pulpit is now in its place, and is back in the Al-Aqsa Mosque.

What was the biggest challenge in rebuilding the minbar?

The greatest a challenge faced by the craftsmen and engineers supervising this work was to assemble 16,500 pieces, some of which were no more than a few millimetres in size. The whole platform itself stands at about six metres in length, and it is a really technical piece of building as it was constructed without using glue, nails, or screws. Rather, it was put together using the method of interlocking parts, to produce what could be called art.

The pulpit, which brings together different forms of art, including geometrics, plant decorations, Arabic calligraphy, muqarnas, and inlays of ivory and ebony, interlock the six main forms of Islamic art.

Is there a specific type of wood that is suitable only for Arabesque?

Turning wood is the commonly mistaken among consumers as Arabesque wood, and it consists of wooden grilles which are turned by a special machine. The resulting parts are assembled as interlocking shapes of mashrabiyyas, windows, or other woodwork. The best type for Arabesque work is beech wood, and for large-scale works we use musk wood, among other types.

Has the shape of the lathe (the machine that casts wood) changed over the ages?

Yes, previously the lathe was like a pallet and it was manually worked. The machine was, until recent times, used to make rosary beads. Now, however, with the advent of electricity, fully automatic, electrically driven machines came into use.