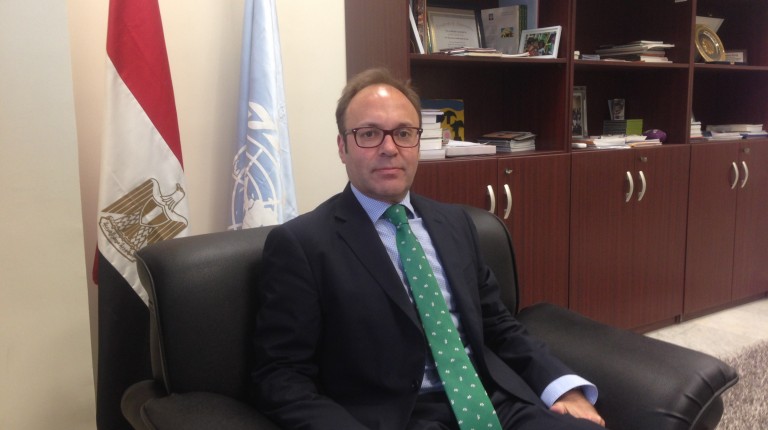 The conversation covered the many indicators that suggest Egypt could reach a “doomsday scenario” in the near future. However, Nadal remains confident the country has a history of good population policies and can return to that era.

Jaime gave a positive assessment of the government’s large-scale infrastructure initiatives and, despite the many concerns that have been raised, spoke approvingly of the plans for a new capital: “It shows the government’s long-term thinking.”

How has Egypt faired in terms of population control?

Egypt is a country that used to do very well in terms of managing population, and has a very successful history of achievements in terms of women’s literacy, granting good quality health services to the population. But it is also a country that has been sliding down over time in terms of coverage and quality of those services. Until you see that the gains made in the ‘60s and ‘70s, at some point it begin to reverse.

Almost half of Egypt’s new births are in the rural south, where poverty is high. Is high population growth this a question of tradition or economics?

The poor are very rational in their way of thinking even though they may be poor. The problem is that they do not have the benefit of time to make long-term decisions. They need to make short term decisions, because survival is a matter of tomorrow. Decisions made about children have a lot to do with this short term thinking, they need people, they need hands to help. The government is now testing a policy of conditional cash transfers programmes that have been very successful in Latin American countries to reduce births. I believe they could be very successful because all traditional societies value fertility, no matter where you are in Bolivia or Egypt.

But by traditional, you just mean poor? The wealth of a family is the main determinant of how many children they will have?

Rural, traditional societies tend to value fertility. But if you ask women from those communities they often say the ideal number of children they would like to have is about three, but they are having six or seven. Cash assistance as an incentive was tested successfully in Mexico and Brazil where the governments said to low-income families “take your children to school, look after their health, your health, and as long as you maintain this behaviour you receive cash assistance”. So if you show socially responsible behaviour to yourself and to society and your family and you receive the cash assistance, so you don’t have to take your family to the fields.

Do you think that’s asking more of the poor than you’re asking from other people in society? You’re not making services to the middle-class dependent on behaviour?

I believe that, for instance, the policies that have been in place such as subsidies were very regressive, the richest were benefitting from them the most. What the government is doing here, slashing subsidies and using it for cash assistance, is based on simple conditions such as vaccinating your kids and taking them to school. These are behaviours that the middle and upper classes are demonstrating, now the government is providing them with the opportunity to do the same, its voluntary.

What do you think of the government’s big infrastructure ideas such as the new capital in terms of population growth?

This has been done in a number of countries such as Nigeria, when Lagos got to a point where it was untenable in terms of population, crowding, roads, pollution and was a successful experiment. The reality is that Egypt is a country that by 2050 will have a population of around 140 million people, by then Cairo may have around 40 million people. With the current level of infrastructure there is no way to handle that. The government is trying to think ahead.

Would the $45bn not be better spent on infrastructure in Cairo? Aren’t the upper and middles classes going to move to a Dubai-style satellite, while the poor will be left behind?

I have not seen this happen in any of the other countries where it has been undertaken. Lagos is still Lagos, it hasn’t become a second-class city. You see a natural process of decantation, where the government moves and some businesses follow, but not entirely. But it comes with many challenges too; providing water, energy, and so on. And what will happen to Cairo after that? A lot of the life here moves around government and business.

How is your relationship with the new Ministry of Population, established in March?

From the discussions I have had with Minister Hala Yousseff, the main focus will be on implementing the National Population Strategy. This is a very interesting piece of work, because it is very comprehensive. It takes in to concern women’s issues, education and rights. The government is starting to recognise that before a healthy baby is a healthy mother and before a healthy mother is a healthy woman, and girl’s education is key. The strategy is looking at family planning, girls educations, women’s education, economic empowerment and youth civil education. This is important because people under 40 make up 60% of the population but you don’t see them in positions of power. What’s being understood is that population is not a matter of balancing your books and saying what is the correct number of children to have, it is about the welfare of people.

Have the past four years brought these issues more importantly as its now also recognised as a question of stability and security?

Egypt is a country that is living in a tight equilibrium in terms of resources, for instance it is the world’s largest importer of wheat: 75% is imported. Think about what large growth means in terms of food and water. What will be the situation if you have to depend more and more on international markets to purchase all that food and water, the country becomes weaker internationally and is a lot more vulnerable to external shocks, it is really a doomsday scenario.

So I truly think that the decisions the government is making in terms of population are very visionary because they recognise that this scenario is looming and may happen and the country has a last opportunity. A lot what was behind the civil unrest of the past few years has to do with the situation that was building up, and it is being recognised that, unless something changes the next revolution will be something different