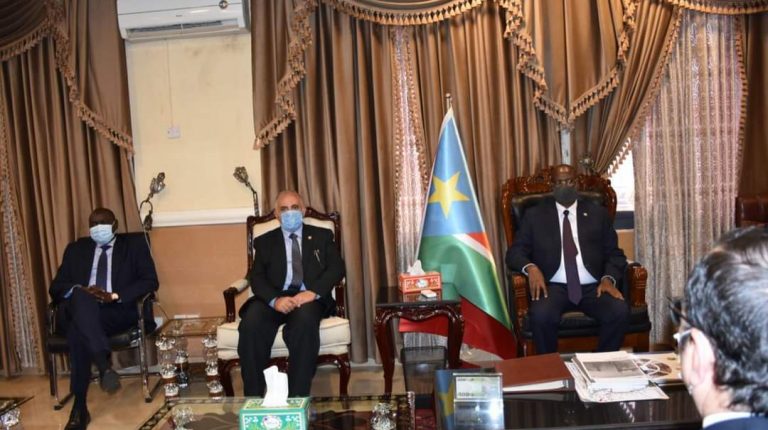 Egypt’s Minister of Water Resources and Irrigation Mohamed Abdel Aaty met with President of South Sudan Salva Kiir, on Thursday, to discuss ways to enhance Egyptian-Sudanese cooperation in the field of water resources.

Kiir expressed his sincere greetings and appreciation of Egyptian President Abdel Fattah Al-Sisi’s support for South Sudan during the recent severe floods that have hit his country. He also praised Egypt’s opening of an air bridge with South Sudan, to provide relief assistance to those affected by the floods.

Earlier on Wednesday, Abdel Aaty arrived in Juba, at the head of a high-level delegation, upon the invitation of South Sudan’s Minister of Water Resources Manawa Peter Gatkuoth.

During his visit, Abdel Aaty a met with South Sudan’s first Vice President, Riek Machar, where the former confirmed that Egypt is carrying out development projects aimed at supporting the citizens of its southerly neighbour.

Abdel Aaty also asserted that Egypt will support South Sudan in implementing further development projects, including the harvesting of rainwater that will be stored for times of drought.

During his visit Abdel Aaty has also met South Sudan’s Minister of Electricity and Dams, David Deng Athorbie. The latter expressed his thanks and appreciation for Egypt’s efforts in developing the state of South Sudan.