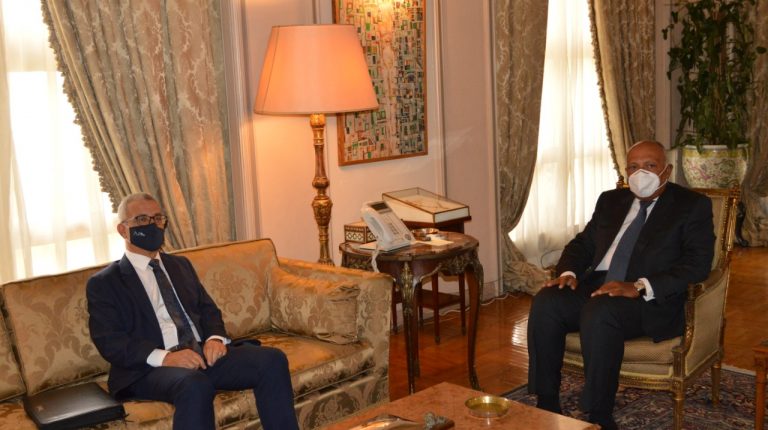 Egypt’s Minister of Foreign Affairs Sameh Shoukry met, on Sunday, with Malta’s Minister for Foreign and European Affairs, Evarist Bartolo, in Cairo for discussions on Libya and Palestine.

During the meeting, the two sides discussed the latest updates regarding a number of international and regional issues of mutual concern, with the Libyan issue foremost among these.

Both ministers agreed for the resumption of flights between the two countries following their suspension due to the novel coronavirus (COVID-19) pandemic. They also addressed increasing cooperation between the two sides at the economic level.

Shoukry and his Maltese counterpart exchanged views and visions regarding the Libyan crisis, particularly amid the latest tensions in the Eastern Mediterranean region.

The Egyptian minister stressed the need for preserving the current ceasefire, and stopping the flow of weapons, terrorist elements, and foreign fighters into Libya. At the same time, work should be undertaken towards reaching the desired political solution to the crisis.

He further added that the desired stability and security in Libya will only be achieved through working seriously towards a complete ceasefire and achieving a “Libyan-Libyan” political solution.

Regarding the Palestinian cause, Shoukry affirmed Egypt’s position in support of efforts to achieve stability and peace as part of international resolutions. This would also work towards preserving legitimate Palestinian rights, and the principle of the two-state solution.

On Thursday, Shoukry discussed the Libyan issue with the High Representative of EU for Foreign Affairs Josep Borrell during the latter’s visit to Cairo.

During the meeting, the two parties discussed halting foreign interference and mercenaries in Libya and ways to resolve the long-time crisis. Shoukry said that Egypt adheres to the Cairo Declaration and the Berlin path to resolve the Libyan crisis, adding that only dialogue and political path are the only way to end the conflict.

Shoukry said that the Sirte-Jufra redline that Egypt announced in June, has contributed to halting aggressive operations and paved the way to activate Berlin Process and Cairo Declaration to reach a political path to end the crisis and meet aspirations of the Libyan people.