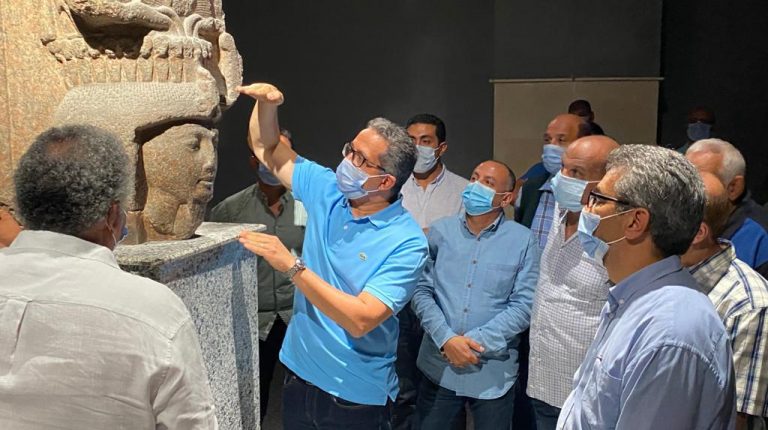 Egypt’s Minister of Tourism and Antiquities, Khaled El-Anani, visited the Sharm El-Sheikh Antiquities Museum twice on Friday and Saturday, to follow up on preparations for its imminent reopening.

Accompanying El-Anani on the tour were: Moustafa Waziri, Secretary General of the Supreme Council of Antiquities; Moamen Othman, head of the museums sector at the Ministry of Tourism and Antiquities; Hisham Samir, Assistant Minister for Engineering Affairs; Iman Zidan, Assistant Minister for Archaeological Sites; and members of the Supreme Committee for Museum Exposition Scenario.

The tour included the museum’s outdoor exhibition area, the fountain area, the bazaars, the main entrance, and the exhibition halls.

During the visit, El-Anani directed for alterations to the display of some artefacts. He also directed for more artefacts to be placed on display, including those recently discovered  which will be displayed for the first time. With these additions, it is projected that the museum’s display system will be further enriched.

The minister also mentioned the re-division of the museum’s first hall into three parts. The largest of these areas will include large scale statues of individuals and animals, to shed light on the Sinai Peninsula’s human and wildlife environment throughout the ages. The rest of the hall will feature two boats to connect the museum to the sea, and finally a model of a Pharaonic tomb with its accessories.

Waziri said that the Sharm El-Sheikh Museum has so far received nearly 5,800 artefacts, with exhibits to be distributed both inside and outside. Inside, the exhibits will be distributed across three halls, namely the Great Hall, the Hathorian Corridor, and the cemetery area.

The Sharm El-Sheikh Museum reflects the different aspects of Egyptian civilisation, and displays a selection of artefacts from across Egypt. Each artefact has been carefully selected from museum stores at Cairo’s Manial Palace, Kom Oshim and Saqqara, as well as the Suez, Ismailia and Luxor Museums. Also featured are artefacts from Alexandria’s Greco-Roman Museum, and Cairo’s Egyptian Museum in Tahrir.

An exhibition entitled “Egypt’s Heritage” will be organised, to coincide with the museum’s reopening, to display handicrafts and traditional items, to encourage the manufacture and sale of Egyptian-made items.

A number of ads and banners, in English and Arabic, have been placed on the streets leading up to the museum, to promote its reopening.

‘Our Heritage’ handicrafts exhibition to launch on Saturday

GEM at the forefront of Egyptian tourism promotion in 2020