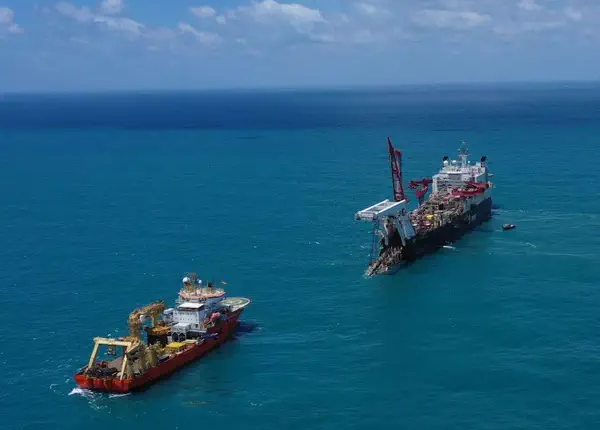 Energean has announced the completion of pipe laying and subsea systems installation works  and 80% of the project in the Karish and Tanin offshore gas development in the Mediterranean Sea.

The Greek oil and gas production company said it has started installing three cranes that will connect the three wells of the Karish and Tanin marine project to the floating utilities. This major step in the project would in turn produce and store gas.

The company added that the implementation of the pipeline to connect the project will start in the fourth quarter (Q4) of 2020, to be completed in Q1 of 2021.

The pipeline’s full completion, including the TIM-Water Depth 72m linking structure, is expected in Q4 of 2020, according to schedule.

The pipeline was extended at an average rate of 4,578 metres per day (excluding beach shore), which represents a high performance by FMCB Technip.

Meanwhile, the Solitaire ship, which installed the pipeline, has continued supporting the Normand Cutter’s manifold and undersea isolation valve foundations and structures.

More than 400 people took part in these maritime operations and recorded zero work injuries. Furthermore, the piping installation and flooding systems connection to the Karish Development project is 80% complete.

“We are very satisfied with the performance of the installations at sea level so far. The Mediterranean’s environment in the spring has proven to be favourable, as the rate of piping installation was remarkable,” said project manager, Vincent Ripoll Salzi.