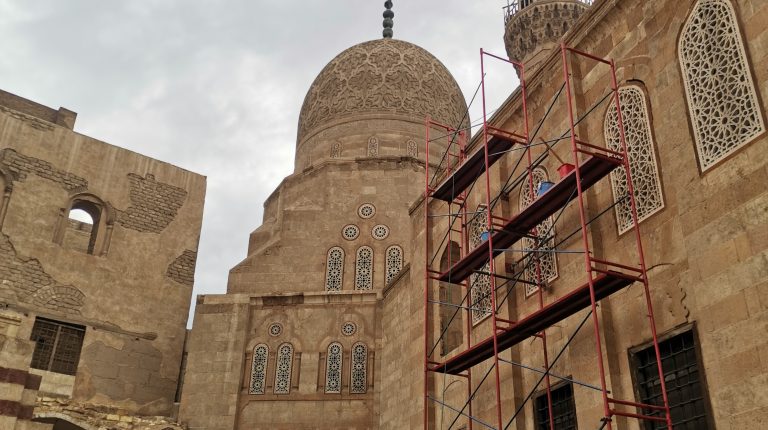 In the middle of Islamic Cairo’s main Street Al Mu’izz, one may find Sultan al-Ghuri’s mausoleum. Legends have it that the place was never used and the whereabouts of the Sultan’s body is still unknown. However, some say that his head is buried under the location.

Known as al Ghuriya, the monumental Islamic complex was built for those that were killed in battle or poisoned, away from home, and buried in an unmarked grave.

Al-Ghuri’s complex consists of a mausoleum for the sultan, a khanqah (Islamic University), a sabil for distributing water, and a kuttab which was an Islamic primary school.

The complex used to have an office where the sultan would receive the public to hear their complaints.

This office overlooks a grave yard where his wife, along with his odalisques, are buried.

Tuman Bay II, the last ruler of Egypt in the Mamluk Sultanate, is also believed to be buried in this place, after he was executed. 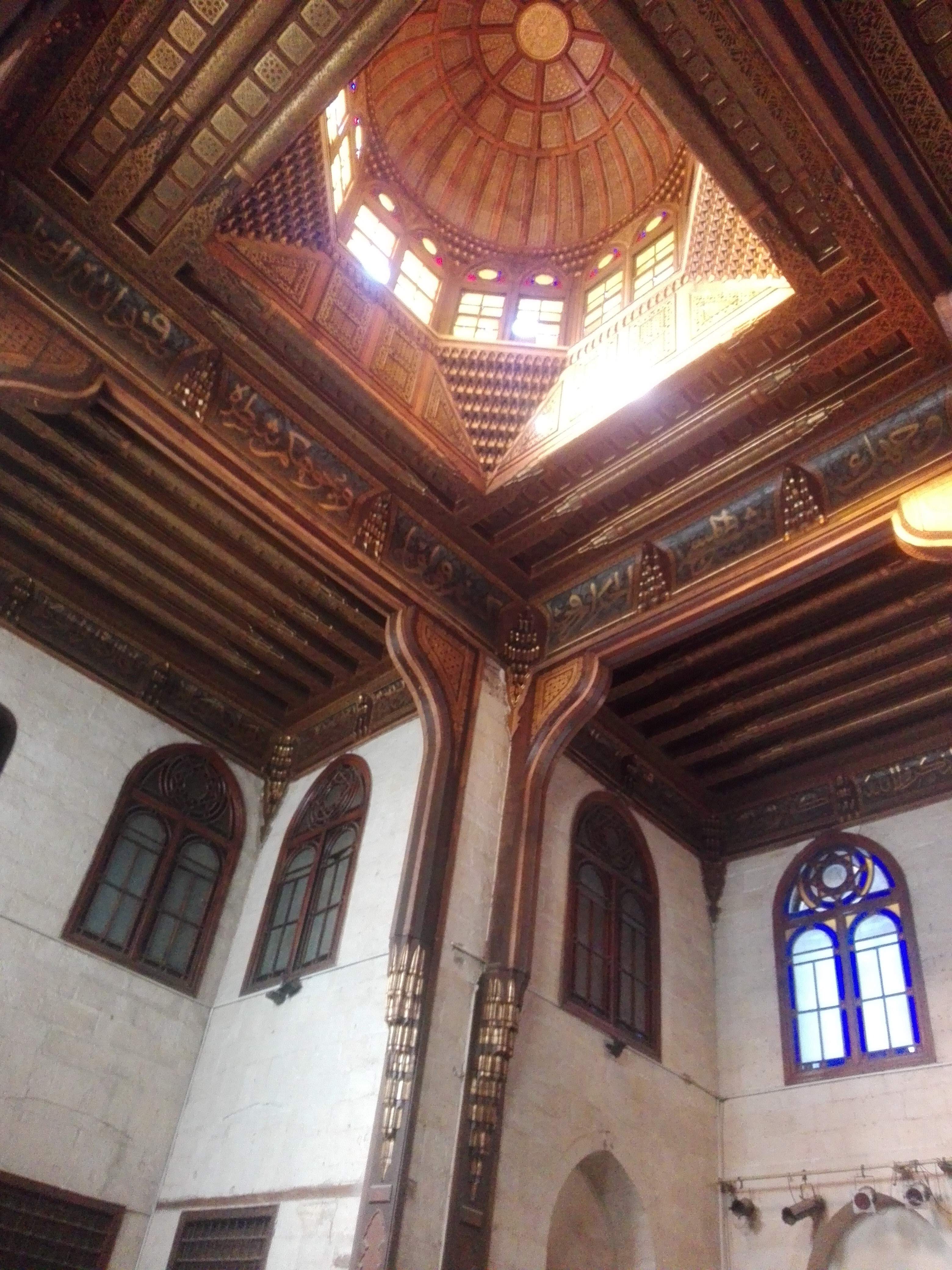 The last period in the Mamluks rule of Egypt witnessed conflicts and countless wars, while some were external, others were internal struggles for the throne with short-lived sultans.

During the Burji Mamluk, or Circassian Mamluk, political power often plays an important role for designating a new sultan. Burji translates into English as Tower, referring to them ruling from the Citadel of Cairo. Constant bickering may have contributed to ending the Sultanate and their defeat by the Ottoman Empire.

This dynasty was shaped by treason; sultans were murdered left and right by everyone around them. This was mainly due to how power was passed down in this era: whoever was able to kill the Sultan would immediately receive the title. So even the guards, servants, and even palace officials would attempt murder just to get the title. Because of this, people dub this time period the era of the one-night sultan.

The main reason behind so much treason during this time was due to how children were brought up. In the time of the Circassian Mamluks, children were brought up in the military. Unlike the Ancient Romans or Greeks that fought under one nation, Circassian Mamluks were treated more like mercenaries, and only had their loyalty located in gold and money.

Since it was any Mamluk’s game to become the next Sultan, even ordinary people started to greed for power. That’s where the Julaben sect comes in; they were a sect of slaves bought and sold as children. They had no loyalty to anyone and played a dangerous role in killing the sultans. The princes of the Julaben Mamluk ruled their own armies, meaning that they were able to control the Sultan.

Qansuh as Sultan of Egypt

Qansuh al-Ghawri was the second to last of the Mamluk Sultans to rule Egypt. He rose to power during one of the more difficult dynasties, the Burji or a Circassian Mamluk rulers. A revolt against Tuman Bay by the conspiring princes led to the appointment of Qansuh as sultan against his will.

Facing revolts, treasons, and Egypt’s empty treasury, Qansuh, as the wealthy prince he was, refused the sultan position, fearing to be deposed by execution like his predecessors. However, the princes forced him to take the position and promised never to betray him.

Knowing that the Mamluks were untrustworthy, Qansuh asked a fortune-teller who will rule Egypt after him. The fortune-teller said that the person who would rule Egypt after Qansuh, has a name that starts with an “S”, therefore Qansuh ordered to kill everyone whose name began with S. Unbeknownst to him, the coming Sultan of the Ottoman Empire was named Selim I.

To replenish the empty treasury, exorbitant demands were levied on every kind of property, almost reaching seven to ten months’ worth of income; even religious and charitable endowments were no exception. This was exacted with such severity, not only from Jews and Christians, but from every class, so to create outbreaks in the city. 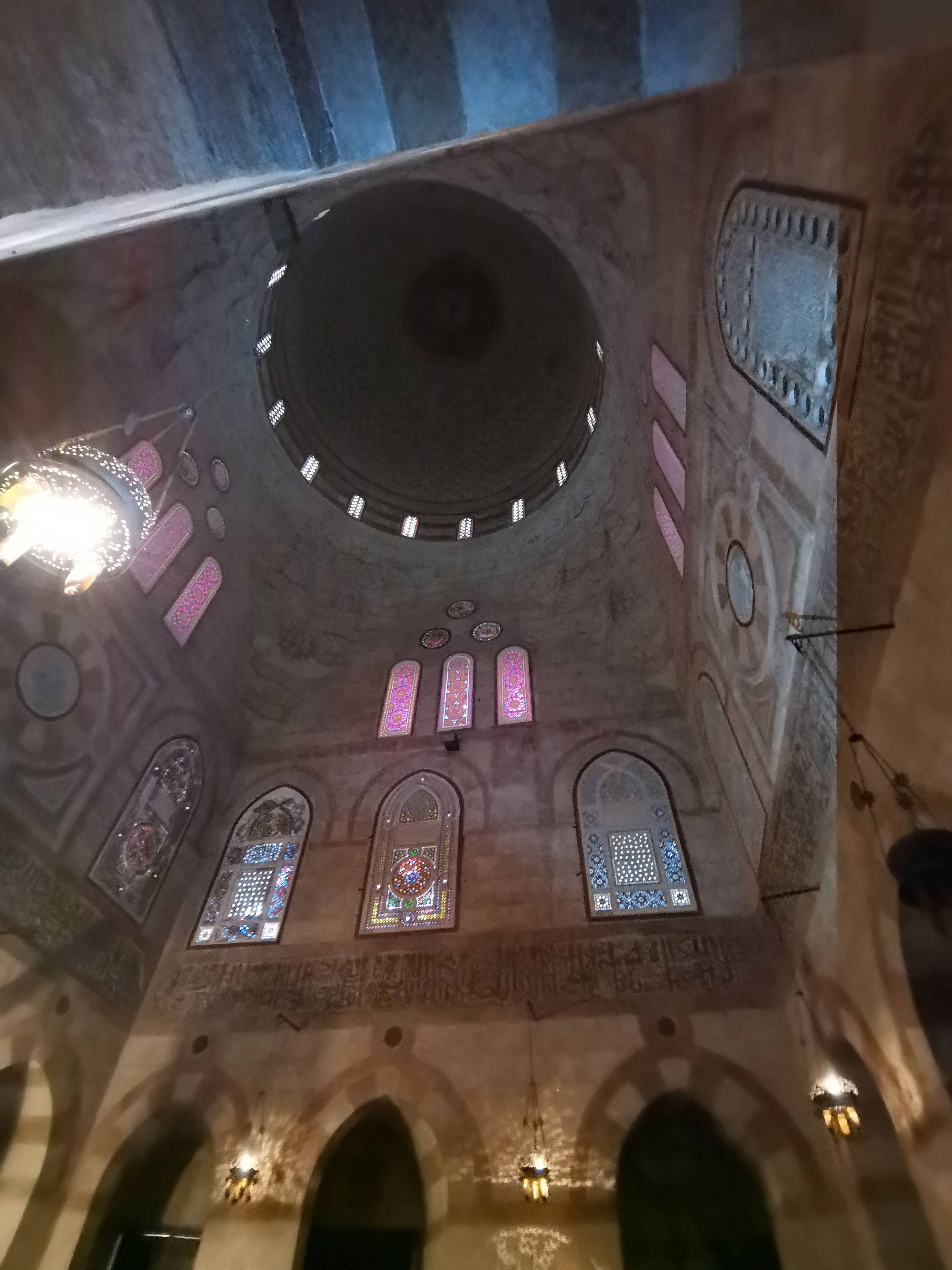 Selim’s war with the Safavid Empire in Iran

The growing Shi’ite Safavids Empire headed by Shah Ismail, challenged the Ottoman Sunni Empire.  As a Shi’ite Muslim, Iran’s Shah Ismail I embarked on a war with the Sunni Ottoman Sultanate over the Caucasus and over religious differences.

However, Egypt’s relations with the Safavid dynasty in Persia raised a new ground of hostility with the Ottoman Sultanate. Selim realised that not only had Shah Ismail I become more threatening, but Egypt’s Qansuh was even more dangerous.

Deceiving Egypt, he used the fight with the Safavids as an excuse to enter Syria, which was under Mamlik’s rule.

Selim started the conquest of Egypt, and in order to reach Iran, he decided to use Syria as an entry point. With no enemies to the north, he could now safely make his advancement. In the spring of 1516 he gathered his forces and marched to the Savafid’s.

Mamluk treason and the fall of the Sultanate

During Selim’s march to the Safavids, the governor of Aleppo Hayir Bey assured Al-Ghuri that Selim would only pass through Syria to fight in Iran.

However, Al-Ghuri doubted the intentions of Selim so he marched to Syria in order to counter the Ottoman occupation.

Before starting the war, the Mamluks set up a war council and decided not to use cannons since Islam prohibited the use of fire when killing, which already made the Ottoman’s more advanced than the Mamluks.

The defeat was due to the betrayal of two Mamluk leaders, Hayir Bay and Janbirdi al-Ghazali who was the viceroy of Hama.

In the battle field, Hayir spread rumours of sultan Al-Ghuri’s death, ordering the army not to move forward. This lead to the Mamluk’s defeat by Selim I at the Battle of Marj Dabiq, north of Aleppo, on 24 August 1516, and to the death of Sultan Al-Ghuri.

Stories however vary to how Al-Ghuri met his end.

Some people say he was poisoned by his servant on the battle field, but others say that he had a heart attack and fell off his horse. However, both stories confirmed that his head was cut off and buried to prevent it from falling into enemy hands.

On the other side the Ottoman’s claimed that he was beheaded by a Turk whom Sultan Selim would have put to death, but afterwards pardoned.

Succeeding his uncle, Tuman Bay became the new Sultan to face the Ottomans. Due to the Ottoman’s advanced weapons , their military power was greater than the ability of the Mamluk army and the fighters who joined from Egypt. The Ottomans were quickly able to take over Cairo.

However, Egyptian resistance did not stop under Toman Bay. He quickly gathered the Mamluk army, and the Egyptian people attacking the occupation forces.

But the betrayal plays its role for the second time and Toman Bay was captured with the help of the Mamluks to be executed in April 1517.

He was executed at Bab Zuweila or Zuweila Gate, the only gate opened for the public. People passing by would for decades read the Quran for his soul.

The remains of a rope and the hook of the gallows by which Toman Bay was killed are kept inside  Zuweila Gate until this very day for visitors to see when entering the gate.

Inside the gates, visitors will also notice the presence of human teeth, wishes, and magic spells. All of these pendants were placed on the door of Zeweila as people believed that there is a magical entity called Al-Mutawakkil sitting above the door every Friday, to deliver people’s wishes to Heaven.

It was said that Toman Bay asked people not to scream or cry, at his execution, but to read Al-Fatihah three times to bless his soul.

Prints of the Orient: SS16 in the eyes of the Moorish, Ottomans, and Mamluks

Why Jerusalem? The politics of poetry

Gates of Glory and Facades of Fame