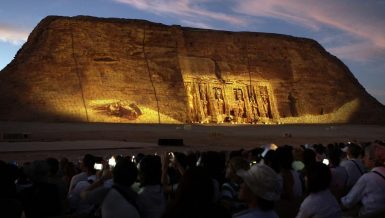 The sun illuminated on Saturday at the face of Ramses II statue in Aswan, announcing the start of the cultivation season according to ancient Egyptians’ beliefs. The phenomenon, that takes place only twice a year, marks the peak of tourism season in Luxor, Aswan, and Abu Simbel.

Dubbed the sun festival, the illumination was at 6:20am and lasted for about 20 minutes at Abu Simbel Temple. The event was witnessed by Aswan Governor Ashraf Attia and thousands of tourists.

Last year, the illumination was attended by 6,500 tourists who usually gather before dawn to witness the light shedding on the 22-metre-long statue slowly starting from face of the statue, expanding to the surrounding giant statues.

The sun festival occurs on 22 October and 22 February. These dates are believed to signify the birthday of the Ramses II and the day he ascended to the throne. On each of these two days, when the sun enters the temple at dawn, the rays illuminate the statues at the back wall only, except for Ptah, the god of the underworld. It is quite a feat that this was achieved in ancient Egypt, considering the technology and knowledge of astronomy that was available.

The Abu Simbel Temple was discovered in 1817 at the hands of the Italian discoverer Giovanni Belzoni, who travelled to the site based on the description of the Swiss traveller Jean-Louis Burckhardt. However, it was relocated in 1968 from its original place where it was built ages ago as the High Dam in Aswan and Nasser Lake resulted in the increase of water level in the region which was threatening the temple.

160% increase in visitors to Abu Simbel since the beginning of 2017: Aboud