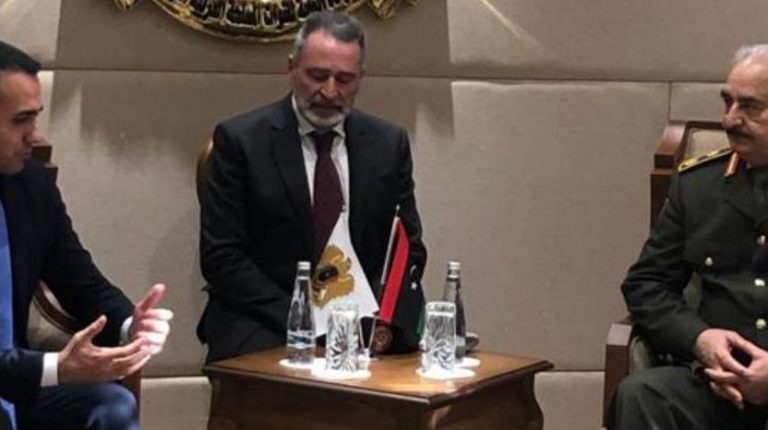 The FM visited Tripoli and Benghazi, the strongholds of the two conflicting sides. Haftar, who commands forces based in eastern Libya and has launched an offensive to take Tripoli from the GNA, which increased tensions in the war torn country.

The visit of Di Maio is part of the efforts to broker an end to hostilities after Italian Premier Giuseppe Conte, German Chancellor Angela Merkel, and French President Emmanuel Macron met on Friday and released a joint statement calling for a ceasefire in Libya.

Di Maio told reporters when he returned from Libya that Haftar will visit Rome in the coming weeks.

“We will talk with Sarraj either later in the evening or tomorrow morning to discuss the results of the trip. I will see Haftar in the coming weeks in Rome, as we agreed in Benghazi,” Di Maio told reporters.

“The current escalation of tension causes concern and it must end,” the minister added.

Meantime, Turkey said it will improve its cooperation with Libya and is ready to provide military support for the Tripoli-based government or back joint steps in the eastern Mediterranean, broadcaster NTV cited President Tayyip Erdogan as saying on Wednesday.

The maritime border deal, signed last week between the GNA and Turkey, was denounced by Greece, Cyprus, and Egypt, as it – according to international law – illegally claim rights over oil and gas drilling rights in the eastern Mediterranean.

Ankara says it may send troops to Libya, which has been divided into rival political factions since 2014, if the Tripoli-based government requests it.

“We will speed up the process between Turkey and Libya. We told them that we are always ready to help if they need it. From military and security cooperation, to steps taken regarding our maritime rights: we are ready,” Erdogan told reporters in Geneva after a forum on migration.

Egyptian President Abdel Fattah Al-Sisi has warned against attempts “to control” neighboring Libya, on Tuesday, as tensions grow over Turkey’s expanding ties with the Tripoli-based government.