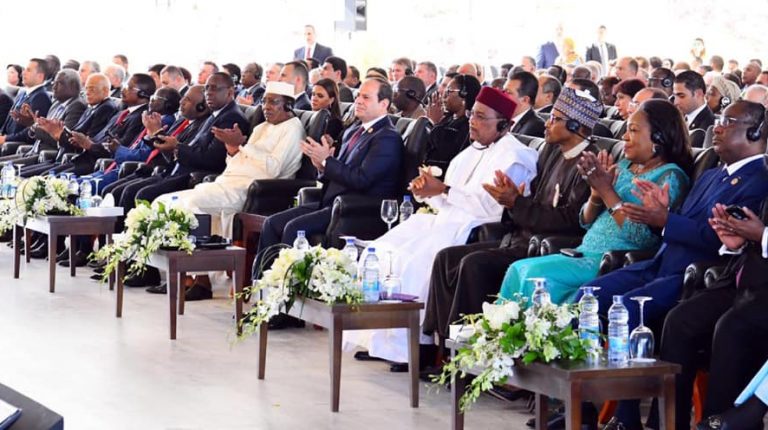 President Abdel Fattah Al-Sisi stressed at the World Youth Forum held in Sharm El-Sheikh the necessity for waging “all-out war” on terrorism, and asserted that no country can confront this phenomenon on its own.

His comments came during a session titled “The current challenges to international peace and security” as part of the forum. Al-Sisi called for collective world policies to eliminate terrorism, which prompted Egypt to participate in international gatherings to combat and eliminate the Islamic State (ISIS).

He added that there is a need to develop a comprehensive concept to combat terrorism in all its forms, whether through fighting against terrorist groups, or social awareness campaigns.

On a different note, the Executive Director of the UN World Food Program (WFP), David Paisley, said that every five seconds one child dies from hunger, explaining that humanitarian conflicts, climate change, and terrorism have caused very high rates of hunger around the world.

During a session on the food security in Africa, Paisley asserted that without food security, countries do not have security at all.

Meanwhile, Director-General of the United Nations Food and Agriculture Organization, Qu Donyo, said that hunger rates are increasing around the world, mainly in Africa and the Middle East.

Donyo affirmed that Africa has the youngest population in the world, estimated at 1.6 billion young people under 35. This sort of population can enhance Africa’s future, and provide new opportunities.

Difficulties faced by families lead to deteriorating health rates among the youth and children, he said, adding that several countries in the region are concerned with their youth’s health. However, countries where problems and conflicts are widespread, such as Syria and Somalia, do not care about their youth.

In another session about militancy, Egypt’s Foreign Minister Sameh Shoukry argued that 2011 protests “contributed to the destabilisation of regional and international peace and security, and threatened the concept of the national state as a result of the change that was taking place in an unorganised manner and the failure of the state to fulfil its responsibilities.”

Shoukry added that revolutions also “led to internal conflicts in Syria, Libya, and Yemen, regional polarisation and expansion of terrorist organisations that take advantage of these conditions.”

He added that they also had an impact on the Palestinian cause which “led to the attraction of young men and fighters and the exploitation of organisations by improper claims of the Islamic religion in addition to the use of social media in further recruiting fighters and young people.”

Shoukry pointed out that President Al-Sisi’s call before the United Nations General Assembly in 2014 for confronting terrorism and renewal of religious discourse had an impact on the region, as well as the president’s call for “developing a comprehensive approach to counter terrorism and extremism in all its forms and dry up their financing sources.”

Similarly, the Secretary General of the Organization of Islamic Cooperation (OIC), Yousef Al-Othaimeen, said the forum reflects the interest of the political leadership in Egypt in addressing issues facing today’s youth, stressing that Egypt is an important country for this organisation.

He added that terrorism is “the plague of the age and is a complex phenomenon linked to politics, economy, and security,” noting that the OIC has a clear position against terrorism and extremism.”

Ministry of Health launches national campaign for vaccination against poliomyelitis