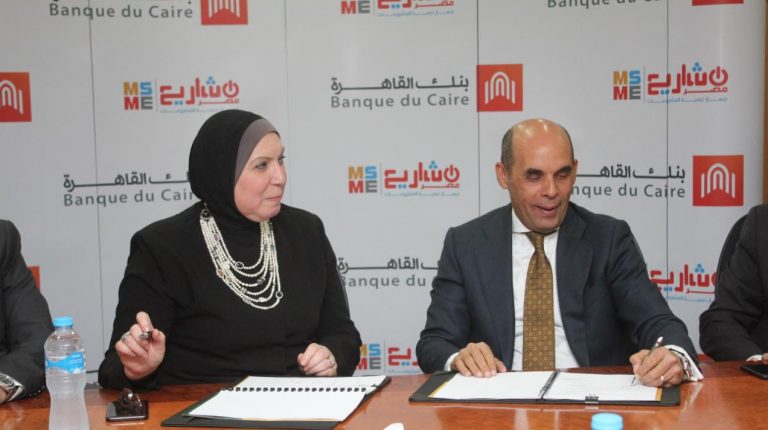 It also comes within the state’s strategy to expand in financing micro enterprises to reduce unemployment and support the owners and employees of these projects. The value of the financing contract will be all directed to Bedaity (My Start) financing project, created by MSMEDA, to provide soft loans for existing micro enterprises.

Fayed said that Banque du Caire has extensive experience in financing micro projects, based on its leadership in this field, which extends for more than 18 years. The bank secured 1.2m jobs serving various segments, notably youth and women who represent about 24% of the total labour market and receive more than 50% of the banking sector’s financing for this sector.

He pointed out that the bank’s microfinance portfolio reached EGP 6.5bn serving 240,000 customers and is expected to increase to EGP 7bn by the end of 2019 in support of the financial inclusion initiative.

Fayed added that the excellence of Banque du Caire in this field comes due to its geographical spread, especially in Upper Egypt, which accounts for 55% of the total portfolio of the bank, while women account for 35% of the bank’s customers, and young people for 40%.

Fayed pointed out that Banque du Caire has adopted a strategy during the current period to launch innovative banking solutions and technological services for micro-enterprise customers, which contribute to saving time and effort. The bank’s customers can now obtain financing in less than 24 hours, through simple procedures and conditions.

According to Fayed, Banque du Caire has launched an electronic payment acceptance service on the mobile wallet with a QR code feature that will make it easier for retailers and collectors to collect payments from suppliers through their mobile wallets.

This service will also provide merchants with more than 13 million e-wallet customers to increase sales and product marketing, stressing that the service provides a less cost-effective and safer alternative to traditional POS and cash payment methods.

He added that the bank has also launched a mobile instalment service where contracts have been signed with the largest companies in the market to collect customer premiums for the micro-credit portfolio. In addition, the bank allows inquiring about the value of loan instalments for customers benefiting from micro-loans and collecting premiums through customer’s electronic wallet “Qahera Cash”.

For her part, Gamea said this contract with Banque du Caire comes in accordance with the state’s plan to provide soft financing for micro projects and encourage citizens, especially young people and women, to establish such projects, or develop their existing projects. These contracts will increase the portfolio dedicated to financing micro projects in cooperation with major banks that have experience in financing these types of projects, in addition to cooperation with hundreds of specialised NGOs.

She explained that Bedaity offers loans up to EGP 30,000, and targets financing about 50,000 micro projects, during the period of implementation of the project across the country, which will provide tens of thousands of jobs.

According to Gamea, the proportion of projects allocated to women in this contract is about 25% of the total funding.

On a different note, she pointed out that during the period from 1992 to the end of September 2019, MSMEDA pumped about EGP 15.8bn, benefiting nearly 2.7 million customers through intermediaries, led by Banque du Caire, Banque Misr, and hundreds of NGOs.

She added that EGP 2bn of this amount has been offered to about 145,000 customers from the beginning of January until the end of September 2019, which provided more than 150,000 jobs in all governorates.

Banque du Caire and MSMEDA have inked several financing contracts since 2012 totalling about EGP 2.386bn in the form of revolving loans, through which 542,000 micro projects were financed through the bank’s branches all over the country.

MSMEDA participates in Financing SMEs and Strat-ups Forum in Jordan

SMEs account for 61% of the total ABE loan portfolio: ElKosayer