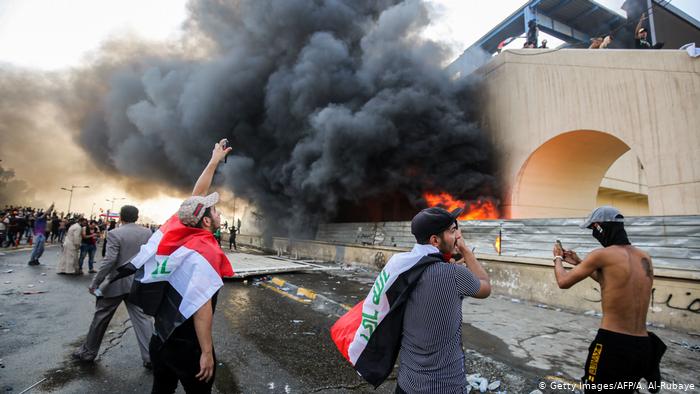 Thousands of protesters participated in anti-government demonstrations in Baghdad and several other cities including Basra, and Nasiriyah. The demonstrations turned violent, as clashes led to the killing of two persons, while those wounded rose up to over 200, including 40 security men, according to Iraq’s Ministry of Health.

Tuesday’s protests, which were described as “the most serious” protest against Prime Minister Adel Abdul-Mahdi’s government, were repelled by police forces using water cannons, rubber bullets and tear gas, according to Iraqi local media.

Mainly the protests were advocated by the economic motives, including what demonstrators believed as the government’s failure to improve public services and create jobs.

Although the demonstrations, which were organised on social media, started as a peaceful gathering of protesters, who marched into Baghdad’s central Liberation Square known locally as ‘Tahrir Square,’ the Iraqi security forces clashed with protesters.

When protesters started to gather on the Square chanting anti-government slogans, the security forces began to fire tear gas, water cannons, live ammunition, and rubber bullets in an attempt to disperse the protesters, who threw stones and empty bottles of water at the police forces.

Meanwhile, the UN’s top official in Iraq, Jeanine Hennis-Plasschaert, expressed “grave concern” on Wednesday, asking the authorities to “exercise restraint in their handling of the protests,” saying that she “deeply regrets the casualties,” according to AFP.

Furthermore, a joint statement was issued by the Iraqi interior and health ministries saying they “regretted” the violence used against the protesters, blaming “a group of rioters” and calling for calm and restraint.

Moreover, the Iraqi President Barham Salih condemned the use of violence against the protesters saying “Peaceful protest is a constitutional right granted to citizens.” The Parliament has also ordered an investigation into the violence.

Unemployment in the oil-rich country reached 25%, according to the World Bank, Iraq is also listed as the 12th most corrupt country in the world by Transparency International.

Three rockets fired near US embassy in Iraq