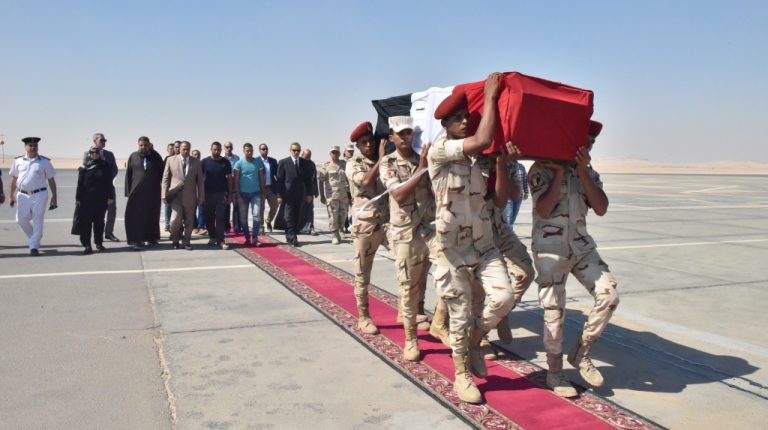 The military said on Friday that 118 militants were killed in operations by the Egyptian army in North and Central Sinai, while 10 military personnel were killed in the process.

The military didn’t release any details or information about the dead militants. However, the Islamic State (IS) affiliated group Sinai Province declared its responsibility for the attack on the same day, allegedly killing the military personnel, including nine conscripts and one officer.

President Abdel Fattah Al-Sisi mourned the dead military personnel on Friday, and military funerals were held for them in several governorates.

According to a statement by the Military Spokesperson Tamer El-Refaie, the Air Forces have destroyed 33 hotbeds and 115 four-wheel vehicles used by militants.

“Military engineers have detected and destroyed 273 explosive devices planted on roads used by the Armed Forces in areas of operations,” the statement added.

They also destroyed 11 tunnel entrances in cooperation with the Border Guard Forces. In addition, up to 37 unlicensed cars and 42 motorcycles have been destroyed during combined raiding operations.

The military added that several bunkers which used to house terrorists have been found, containing quantities of food, weapons, ammunition, and communications equipment.

“The Naval Special Forces have also continued to secure the Mediterranean and Red Sea coasts to secure economic interests and activate maritime security measures within the country’s territorial waters,” the statement added.

The spokesperson added that the border guard forces reported to have also seized 15 rifles, machine guns, two RBG launchers, and 25 magazines. They also took hold of large amounts of narcotics.

On another note, an illegal migration attempt carried out by 11,071 people of different nationalities has been thwarted.

“Terrorism is still plotting to kidnap this country, but we will remain steadfast, fighting it with all our strength and faith,” President Al-Sisi said on his Twitter account. “We will win the battle thanks to our strong national army,” he added.

“A popular will; determined to uproot all kinds of terrorism, is needed to win the battle. Our nation’s goal has to be eliminating terrorism and giving absolute priority to national interest,” Al-Sisi said.

The Chief of Staff of the Armed Forces Mohamed Farid asserted on Friday during an inspection of a military unit at the Southern Military Zone that “Egypt’s security lies in the army’s strength.”

Terrorism trial of 555 members of IS affiliated ‘Sinai Province’ postponed