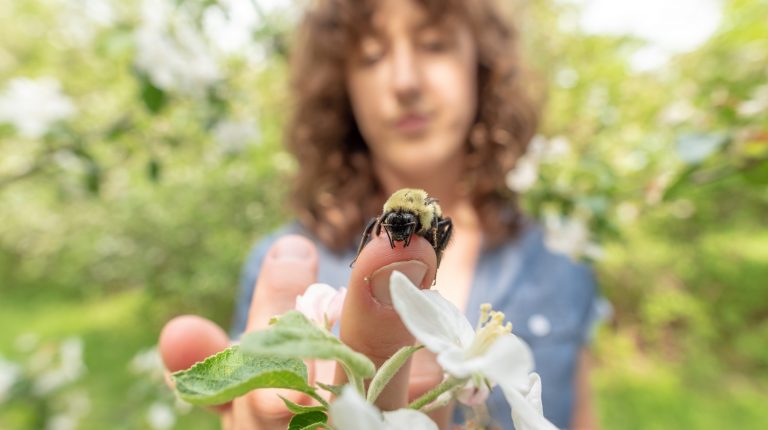 Many species of wild bumblebees are in decline and a new research shows that diseases spread by domestic honeybees may be a major culprit.

Several of the viruses associated with bumblebees’ trouble are moving from managed bees in apiaries to nearby populations of wild bumblebees—”And we show this spill over is likely occurring through flowers that both kinds of bees share,” says Samantha Alger, a scientist at the University of Vermont, who led the new research.

“Many wild pollinators are in trouble and this finding could help us protect bumblebees,” she says. “This has implications for how we manage domestic bees and where we locate them.”

The first-of-its-kind study was published on 26 June in the scientific journal PLOS ONE.

Around the globe, the importance of wild pollinators has been gaining attention as diseases and declines in managed honeybees threatens key crops. Less well understood is that many of the threats to honeybees (Apis mellifera)—including land degradation, certain pesticides, and diseases—also threaten native bees, such as the rusty patched bumblebee, recently listed under the Endangered Species Act; it has declined by nearly 90% but was once an excellent pollinator of cranberries, plums, apples, and other agricultural plants.

The research team, including three scientists from the University of Vermont and one from the University of Florida, explored 19 sites across Vermont. They discovered that two well-known RNA viruses found in honeybees—a deformed wing virus and a black queen cell virus—were higher in bumblebees collected less than 300 metres from commercial beehives. The scientists also discovered that active infections of the deformed wing virus were higher near these commercial apiaries but no deformed wing virus was found in the bumblebees they collected where foraging honeybees and apiaries were absent.

Most impressive, the team detected viruses on 19% of the flowers they sampled from sites near apiaries. “I thought this was going to be like looking for a needle in a haystack. What are the chances that you’re going to pick a flower and find a bee virus on it?” says Alger. “Finding this many was surprising.” In contrast, the scientists did not detect any bee viruses on flowers sampled more than one kilometre from commercial beehives.

The UVM scientists—including Alger and co-author Alex Burnham, a doctoral student—and other bee experts have for some years suspected that RNA viruses might move from honeybees to bumblebees through shared flowers. But—with the exception of one small study in a single apiary—the degree to which these viruses can be “horizontally transmitted,” the scientists write, with flowers as the bridge, has not been examined until now.

Alison Brody, a professor in UVM’s Department of Biology and senior author on the new PLOS study, said that these results strongly suggest that “viruses in managed honeybees are spilling over to wild bumblebee populations and that flowers are an important route. Careful monitoring and treating of diseased honeybee colonies could protect wild bees from these viruses as well as other pathogens or parasites.”

Alger, who is also an expert beekeeper and researcher in UVM’s Department of Plant and Soil Science and Gund Institute for Environment. is deeply concerned about the long-distance transport of large numbers of honeybees for commercial pollination.

“Big operators put hives on flatbed trucks and move them to California to pollinate almonds and then onto Texas for another crop,” carrying their diseases wherever they go. And between bouts of work on monoculture farm fields, commercial bees are often taken to more pristine natural habitats “to rest and recover, where there is diverse, better forage,” She noted.

“This research suggests that we might want to keep apiaries outside of areas where there are vulnerable pollinator species, like the rusty patched bumblebees,” Alger added, “especially because we have so much more to learn about what these viruses are actually doing to bumblebees.”

Honeybees are an important part of modern agriculture, but “they’re non-native. They’re livestock animals,” Alger added. “A huge misconception in the public is that honeybees serve as the iconic image for pollinator conservation. That’s ridiculous. It’s like making chickens the iconic image of bird conservation.”

Total of 59,455 expats in Egypt have undergone virus C screening

Student threw himself from window during “Chemistry” exam