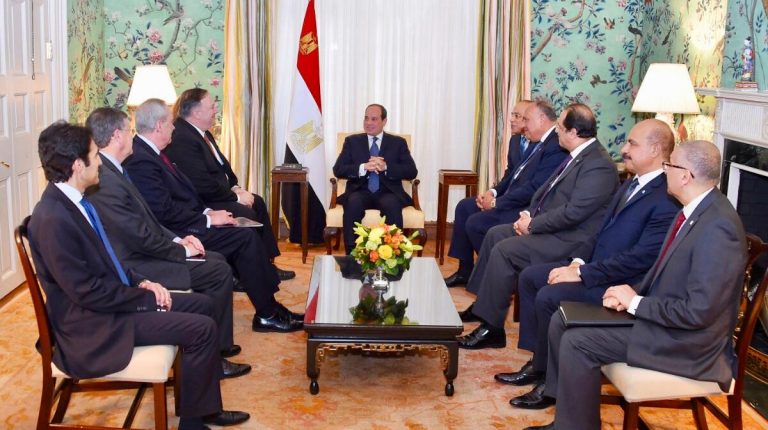 President Abdel Fattah Al-Sisi discussed several bilateral and regional issues with his US counterpart Donald Trump on Tuesday in Washington. Following the meeting, Trump praised Al-Sisi efforts for combating terrorism, saying that a lot of progress had been made with Egypt in terms of terrorism.

“We have never had a better relationship between Egypt and United States than we do right now,” Trump said. During a press conference, the US president noted that he doesn’t oppose Al-Sisi’s efforts to alter the Egyptian constitution. “I think he is doing a great job,” Trump said.

During his first day in Washington on a five-day visit, Al-Sisi discussed the bilateral relations between Egypt and the United States with the US Secretary of State, Mike Pompeo.

According to a statement from the presidency’s spokesperson, Bassam Rady, the president affirmed Egypt’s keenness on boosting and increasing its strategic partnership with the US, which is an important pillar for maintaining security and stability in the Middle East.

For his part, Pompeo welcomed the visit of Al-Sisi to Washington, stressing his confidence that Al-Sisi’s talks with the US President Donald Trump will support the relations between the two countries in a constructive and positive manner, especially in light of the commitment of the US administration to strengthen the frameworks of cooperation with Egypt in different fields, according to the statement.

He also praised the efforts of Al-Sisi in combating terrorism and achieving comprehensive and sustainable development in Egypt and the region as a whole, while expressing his country’s support for those efforts.

Rady added that the meeting discussed a number of regional issues, especially the updates in Libya, Syria and Yemen. In this regard, President Al-Sisi stressed that there is no way to resolve these crises except through political solutions.

Al-Sisi clarified that political means is the only way to keep the integrity of these states and the safety of its national institutions. He also believes that political settlements will provide a security base for combating terrorist groups and besieging their elements to prevent their transfer to other countries in the Middle East.

For his part, Pompeo expressed aspiration of his country to intensify mutual coordination with Egypt on the Middle East issues, in light of the Egyptian political role in its regional environment, praising the efforts exerted by Egypt in order to support efforts to reach political solutions to the recent crises in the region.

Moreover, Al-Sisi and Pompeo reviewed the latest developments in the Palestinian cause and the means of reviving the peace process. Pompeo expressed the US’ deep appreciation for Egypt’s recent efforts to contain the situation in the Gaza Strip and to prevent escalating the situation between Israel and Palestinian resistance movements.

The US diplomat also expressed hope for continued consultation with Egypt regarding the Palestinian issue in order to reach a comprehensive solution that guarantees the rights of the Palestinian people and the establishment of their independent state in accordance with international norms.

Moreover, the president met with Jared Kushner, the senior adviser of Trump. The meeting addressed the Palestinian cause and reviving the peace process. Kushner stressed the importance of Egypt’s role in the Middle East.

Al-Sisi asserted that Egypt will remain a supporter of any sincere effort to ensure a fair solution to the Palestinian cause based on the resolutions and references of international legitimacy, the two-state solution and the Arab initiative.

We have now seen the unseeable: astronomers release first ever image of black hole