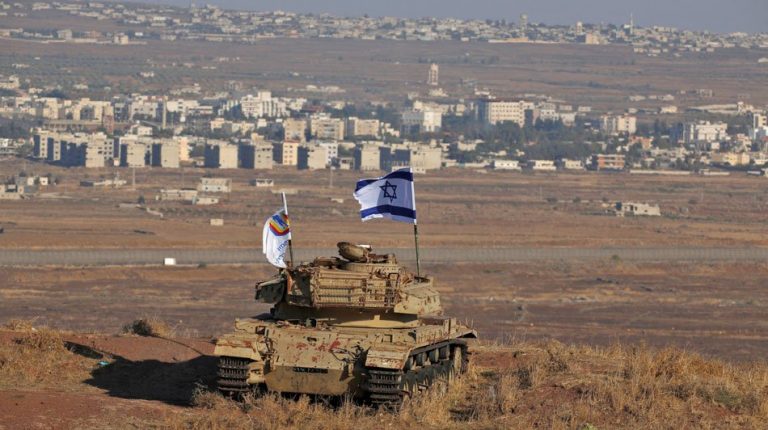 As expected, the US President’s Donald Trump responded to the Israeli pressure and signed late on Monday an official proclamation recognising Israel’s sovereignty over the occupied Golan Heights. The move has been addressed in Wednesday’s newspaper issues. Some writers also debated over the technical problems within the electronic exams of the first secondary stage using electronic tablets.

Emad El-Din Hussein, editor-in-chief of Al-Shorouk newspaper, wrote that the US recognition of Jerusalem as the capital of Israel and the recognition of Israel’s sovereignty over the occupied Golan Heights took place because of the Arabic and Palestinian division and weakness.

Hussein asserted that the Arabic submission to Israel and the US would not lead to peace, however, he noted, no one expected that the Arab countries could reach this limit in their obedience. Hussein noted that Trump deceived the Arabs when he relocated the US embassy from Tel Aviv to Jerusalem.

In state-owned Al-Ahram newspaper, serval columnists tackled the Golan issue. Al-Ahram editorial opened with denouncing Trump’s decree, noting that the US’ recognition of Israel’s sovereignty over the plateau is a serious development as it is a blatant violation to international resolutions.

In the same newspaper, Farouk Gouida opinionized that Trump should be the president of Israel, not the US’ because of his “Zionist stances and perceptions.” Gouida wondered whether the transfer of the sovereignty of homelands and cities that easy? referring to Jerusalem and the Golan Heights.

On the other hand, Sherif Abdeen of Al-Ahram, pinned that the failure of the first electronic exam last Sunday proved that the Egyptian people are deprived of happiness. Abdeen argued that the failure cannot deny the state’s efforts aimed to develop and improve the educational system in the country.

Also, in Al-Ahram, Osama Al-Ghazali Harb revealed that he was not surprised with the technical sever errors, as they were expected because the server was overloaded. Harb said that despite his appreciation for the minister of education’s keenness on improving the educational system, yet this process should start with reforming the schools and restoring the respect and prestige to teachers.

In secondary school’s exams 36% of students got 90% or more: Shawky