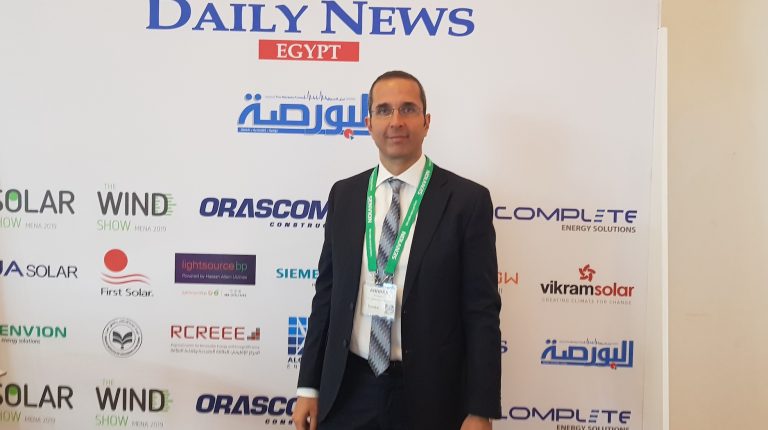 With a plan to be a regional energy hub, Egypt is building a hydroelectricity power plant, a nuclear power plant, a wind farm, and solar power plants, aiming to increase its use of renewable energy to 22% by 2020. Experts see the government’s effort as impressive, they yet believe there are some issues that need to be tackled.

Katherine Poseidon, a policy analyst in Europe, Middle East, and Africa at Bloomberg, thinks that Egypt is one of the strongest markets in the Middle East for renewable energy, with different incentives for investments in the sector.

Poseidon is one of many experts attending the Solar and Wind Show 2019 in Cairo last week. The show is the region’s leading renewable energy conference and exhibition for policy-makers, utilities, local industry tycoons, and international technology experts to meet and discuss the most notable trends and important issues in the sector.

“Egypt now moved from a fixed feed-in tariff model to a more auctions and tenders’ model in the sector. I think it is very positive, the feed-in tariff in general has been useful in many markets, when renewable projects were seen as riskier. Now this is not definitely the case in Egypt, so moving toward more competitive mechanisms- auctions and tenders- makes prices go down, as Egypt has opportunities for developers to get involved in the market,” Poseidon added.

Bloomberg conducts a project annually in order to assess investment environments for renewable energy, looking at what the available opportunities across different markets. Egypt’s overall score went up this year. Poseidon sees the reasons behind this improvement are the electricity market reforms, ongoing legislation, and the moves toward electricity subsidy.

“Egypt is in position, where it could try to be a regional energy hub, in terms of renewable resources; the country has some of the best wind and solar resources globally, the challenge for Egypt will be to compete with other regional markets that have the same ambition,” Poseidon said.

“In the regional race, Egypt has such a dynamic growth according to forecasts. With the growing global power demand, Egypt has advantages in term of its resources and infrastructure, and it could act as a regional hub. The amount of capacity needed will have to be significant, because Egypt itself will need so much more power going forward and in order to export power as well, therefore massive capacity addition will be necessary,” Poseidon added.

Furthermore, Poseidon highlighted that there is no “prefect formula” which could be adopted by countries in the renewable energy sector, because every electricity market is different. However, flexibility and adaptability to implement policies which respond to market conditions is probably the most important factor.

Gurmeet Kaur, a board member of the Middle East Solar Industry Association (MESIA), sees that the future of the energy sector for MENA countries including Egypt carries some challenges, one of them is that at night the supply of sunrays stops, so they need to find storage options to make it available 24/7.

“Having a clear regulatory framework is very important, to put clear rules about how the solar projects are going to be tendered. They also should not forget to focus on encouraging smaller solar projects such as rooftop projects, because it is easier to produce the power and consume it at the same place,” she added.

Kaur pointed out that removal of electricity subsidies in regional countries will make consumers turn to renewable energy, because it is cheaper over time. “Our mission in MESIA is to promote solar energy solutions. We collaborate with the governments, including the Egyptian government, which is remarkable in what it has done in terms of developing the market and having a supportive environment for investment in the sector.”

According to Kaur, there are always improvements which could be done. In Egypt, she believes that permits and licences could be finished in less time, and more information could be made available to developers.

Additionally, she stated that the Middle East will have a mix between renewable energy and fossil fuels in the future. However, renewable energy will play a larger part in that mix, driven by the clear targets of the region’s governments.

Andrea Di Gregorio, the director at the Energy Efficiency and Renewables Office Municipality of Ras Al Khaimah, the UAE, thinks there is a massive opportunity for renewable energy in the MENA region, because of many factors. One is the availability of space for solar plants, another factor is solar intensity, so the possibility exists to benefit from a higher intensity solar power.

“This is leading to prices that are most competitive in the world, so I expect solar energy to take the lead in the future development, yet the question is whether the region’s countries will be able to completely rely on solar energy on the long term.” he said.

Gregorio believes that the future of energy sector in the region will witness increasing energy efficiency, since most MENA markets have committed to the UN Framework Convention on Climate Change, and are increasing the adoption of renewable energy, which will drive reduction of prices, therefore the prospect is very positive. “I think the Middle East will be a driver in global change,” he added.