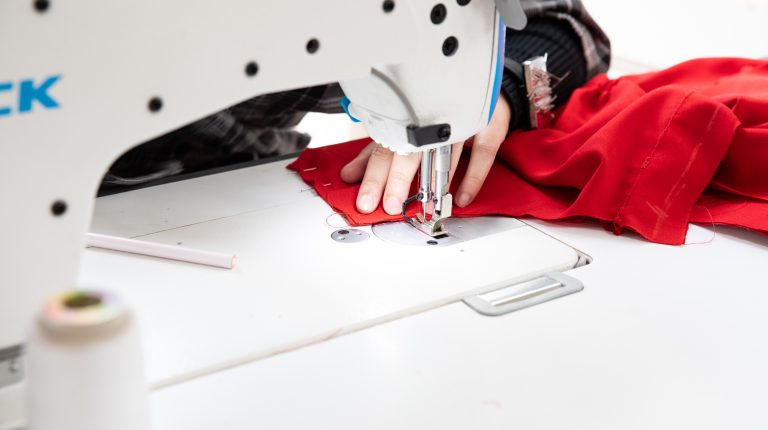 With the political and economic turmoil taking over the Middle East, creative industries such as fashion are deemed to embrace more socially-constructive approaches sooner rather than later. While beautiful clothes are often the focal point of any fashion house on the rise, regional and local talents are currently more focused on garments which deliver eloquent messages to a pro-active audience. 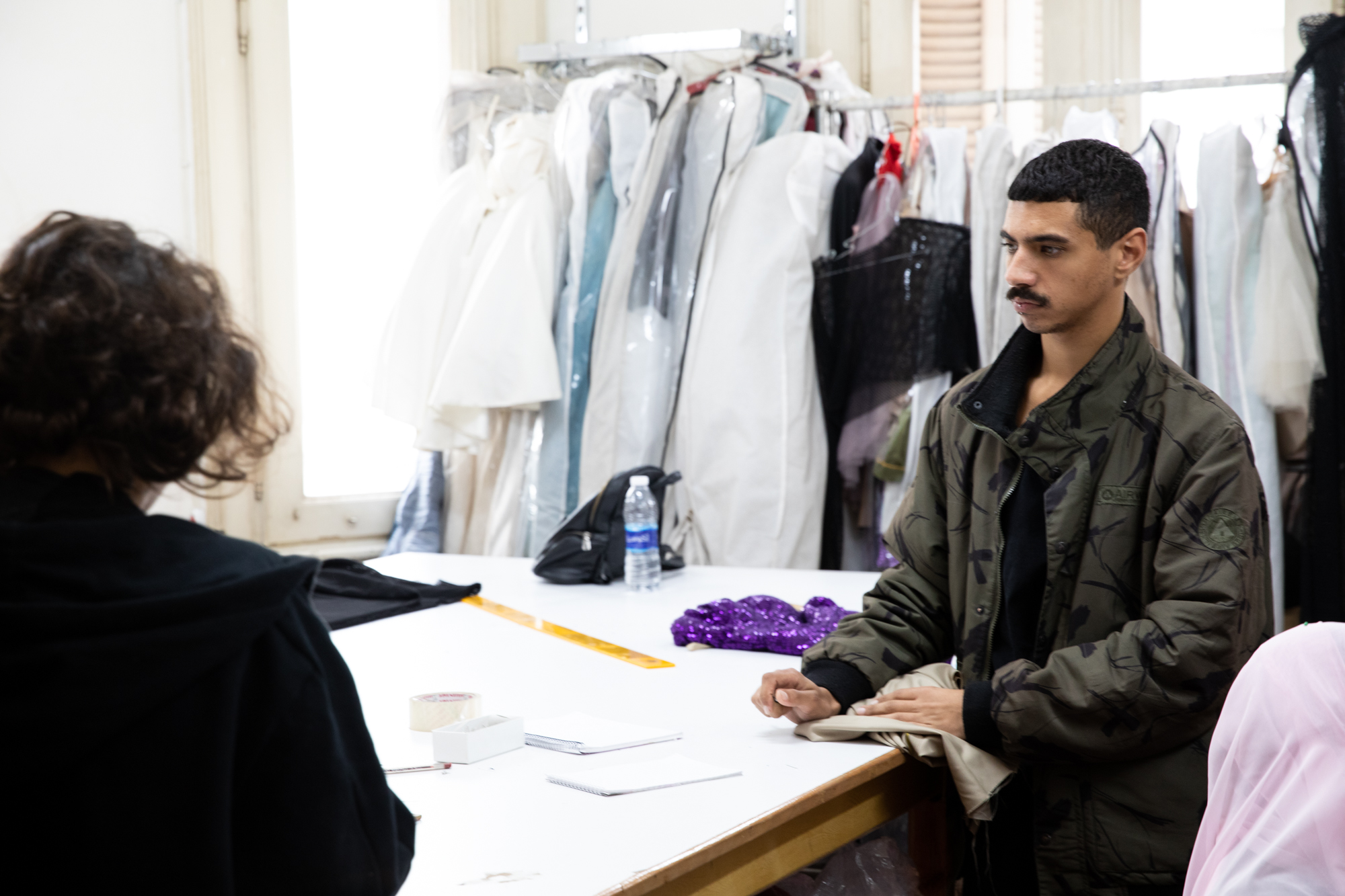 Mohanad Kojak is one of the most recognised names who are currently making an impact in the regional fashion scene. Known for his peculiar style and honest interpretation of sizzling topics, the young designer is constantly keen on translating the country’s heart-beat into garments. While the world is still divided over the immigration crisis and the on-going war taking hold of Syria, the fashion designer once again chose to express his thoughts through fabrics.

“It all started when we approached the International Organisation for Migration because we wanted to highlight that Kojak as a brand is always keen on evoking social impact within different aspects and in different directions,” said Kojak while sitting at his picturesque office in the heart of Garden City, Cairo. The designer, who has previously tackled subjects such as sexual orientation and family detachment, is on the path to not only educate people, but also to open their eyes to various uncommon topics.

He said, “Recently, I have heard many people claiming that Syrians are replacing Egyptians in certain domains,” Kojak added passionately, “such accusation has never appealed to me and I never thought that it is even valid; if someone is qualified for the job then he cannot be replaced.” On the contrary, the designer believes that their skills have created healthy competition, as it can be regarded as an invitation for the local talent to work harder to maintain its place.

“Syrian workforce has the ability to help our economy in many ways. Many businesses have already benefited from this change. Accordingly, I wanted to highlight the idea of inclusivity through incorporating both cultures and identities,” explained Kojak. 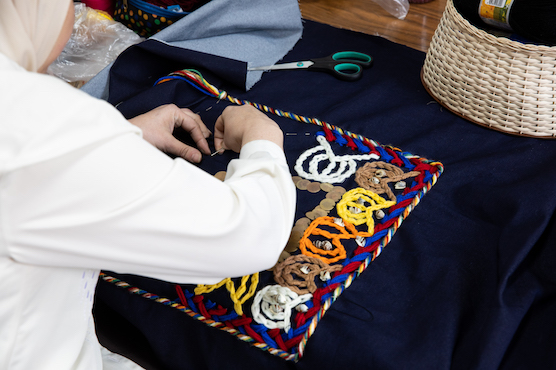 Motivated by his convictions, the designer started working on this social project last year. Between developing a programme and finding the right artisans, Kojak admits that the road included multiple road pumps. According to him, reaching final decisions with the IOM was not simple.

Nonetheless, at the end, the team settled on including five women, a mix of Egyptians and Syrians, and had them work on a mini collection. “We interviewed about 30 women in order to find these five heroines, who complete each other and fulfil cohesive tasks,” stated Kojak. The designer’s main goal was for him to help them develop their skills. “I started with what they were already great at, afterwards, I focused my attention on widening their perspective and connecting them with current trends,” explained Kojak.

Coming across a recruiting ad online, Lamia from Egypt was instantly motivated to apply for the programme. “I love tailoring and design, it has always been one of my main hobbies. Even though I have been designing and tailoring my own wardrobe for over eight years, I have never thought of pursuing fashion as a career.” Lamia added “after this experience, I am certainly inspired to pursue this as a full time occupation.”

As the designer would choose to summarise it, he worked with the female artisans to help them find means to capitalise their time and effort in order to create garments that are suitable for the right target segment. “Creating beautiful creations is great. Yet, is it truly what people want now?” wondered the designer.

Due to the strict selection process, the participating seamstresses already knew their way around fabrics and materials; they even created amazing garments. However, they lacked a sincere connection with the market to fathom what truly sells today. On the other hand, the team also collectively worked on enhancing the artisan’s finish as well as their ability to edit their work to reach pieces that have a strong story; yet, are still wearable and contemporary.

With that said, the participants were asked to create ready to wear pieces out of left-over materials. “I wanted to limit them in order to make them appreciate their resources far more in the future. Artisans often tend to find excuses such as shortage of fabrics. Therefore, working with limited resources can make you change your perspective,” said Kojak. 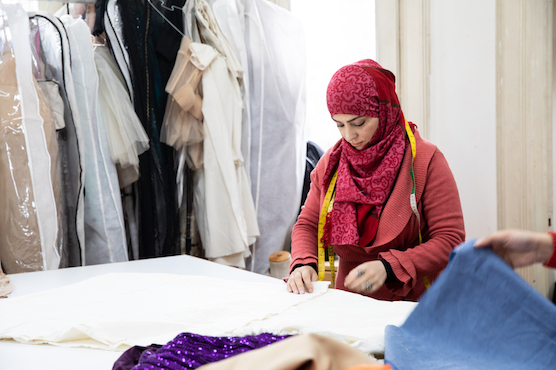 According to the designer, the girls did in fact absorb all the information quite fast as he has seen them work on things that are cool and interesting; yet, still reflect their own DNA. The main theme of the capsule collection was a result of a group brainstorming session. Inspired by the artisans’ individual stories, the collection focuses on the gypsy life.

After leaving her hometown in Syria five years ago, Hanouf spent a year in Turkey before moving to Egypt, where she pursued her career as a tailor and established her own workshop. “I am mostly happy about working on a certain Abaya, for which I used three different types of fabrics, each piece was only half a metre. I have also mastered mixing and matching contradicting colours and patterns. This experience made me much more courageous,” stated Hanouf with a giggle.

In parallel, Lamia’s favourite piece from this collection is a two-layer skirt. “At the beginning, I had doubts because I only had a very small piece of fabric to work with. Yet, I was proud of the end result. It merited me a new perspective on the potential of each and every scrap of fabric,” said Lamia excitedly.

Due to the selected materials, the collection depended on patch work and rich embroidery, which showcased the participants’ techniques. As for the silhouettes, the team wanted to mainly target practical women, who want something to wear to either on a shopping trip or for a brunch, therefore, favoured loose fits. Meanwhile, they included versatile pieces that can be layered.

In conclusion, as the artisans are happy about their progress and how their aesthetic has been permanently affected, Kojak is also thankful for the experience for expanding his horizon as well. “I believe that as designers we should always be open to learn.” Added the designer “as the girls learnt, I was also allowed to be part of their journey and consequently broaden my viewpoint.”

$17.5bn foreign investments in debt instruments by the end of June

Lana El-Sahely lands in Egypt with a capsule collection