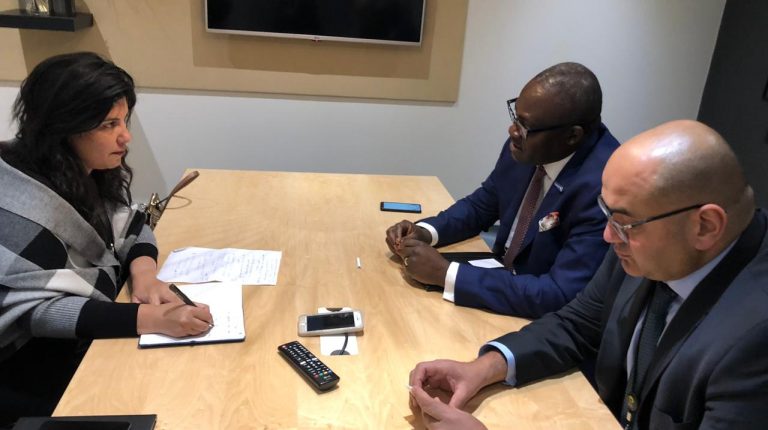 On the sidelines of the second day of Mobil World Congress 2019 (MWC), Daily News Egypt interviewed the Chief Corporate Affairs Officer at Etisalat Misr, Khaled Hegazy, and the Head of Global Etisalat Customer Unit at Ericsson, Ekow Nelson. The transcript of the interview is below, lightly edited for clarity:

How would your companies promote 5G in Egypt, especially that the 4G wasn’t a huge success?

Nelson: Egypt didn’t issue any licenses for 5G yet, but our new Ericsson radio system that we launched a long time ago, is 5G ready, which means that the hardware we have for 4G only requires software upgrade to work on 5G.

Hegazy: First, allow me to disagree with you, 4G is a huge success in Egypt. The problem is with customers’ perception as they thought that the difference between 3G and 4G would be the same as it was with 2G and 3G. Unlike its predecessor, the transition from 3G to 4G wasn’t as revolutionary, but it improved the efficiency, capability, and data demand.

Without the 4G, it wouldn’t have been possible to carry the current mobile broadband, as 4G increased data consumption, even though there was no 4G specific mobile apps, in the last two years, reliance on mobile data increased tremendously.

Etisalat Misr has always been future oriented, for example our sim cards were 4G ready since we launched in the country in 2007, so when the technology was here, we were the only operator that didn’t need a sim change.

Across the networks, more than 30% increase was witnessed in the last two years, which improved Egyptian consumers user experience.

However, 5G is a different story. The use case is different. It is more of a machine to machine communication, Internet of Things (IoT), autonomous vehicles, and automated factories.

With 5G the industrial use cases would drive the demand, not the other wise, and not the handset customers.

In your opinion, when will 5G be launched in Egypt?

Hegazy: When the need is there, because a lot of IoT use cases can be used now on 3G and 4G. The real need will come when Egypt has the factories that requires such connectivity, or when we have autonomous vehicles. 5G will be commercially available as of 2020 globally.

Nelson: In fact, we started some deployment this year in the United States and allow me to add a little bit to what Hegazy said about traffic growth. In Ericsson Mobility Report 2018 that we have just launched, we predicted that by 2024, people will be consuming five folds the amount of data that they currently consume.

Therefore, you need the networks to be able to cope with that increase, so in addition to the industrial use cases of 5G, you will need some 5G networks to support the massive growth in data consumption.

What are the main challenges facing 5G deployment globally and Egypt, especially in terms of infrastructure?

Nelson: The big issue is the business case because mobile operators need to make a massive investment. They need to make sure that they secure a return on such investment, take Saudi Arabia for example, the government decided they want 5G as part of 2030 strategy, they didn’t need a business case in that situation, but in Egypt there isn’t such a mandate from the government.

Hegazy: I think you have touched on an important point here in terms of infrastructure, we do need as a country, heavier investment in infrastructure, and what we heard lately that Telecom Egypt is now focusing on that, and that would help not only 5G but for all the existing traffic.

Egypt is a huge country with 100 million population, with the new cities being built, and the increase in data usage, serious investment in infrastructure is necessary.

Does Etisalat have any plans to invest in infrastructure?

Hegazy: We are seeing positive signs from the Egyptian economy. In the beginning of 2018, Etisalat Misr increased its capital by over EGP 4bn. We will continue to invest, however, the investment I was talking about isn’t the same that we are allowed to do, only Telecom Egypt can do.

This year we are investing between EGP 2.5-3.5bn mainly in modernisation and capacity development of our network and 4G rollout, so far we have invested over EGP 35bn in the market.

Nelson: The migration to 5G isn’t going to be a sudden change. First you would have the coexistence of both networks, we are building products that allow you to maintain your 4G network, then slowly implement 5G.

You are not going to have 5G everywhere, it will be deployed in selective pockets where it makes sense.

What is the key solution that Ericsson will provide to improve cooperation between the two companies?

Nelson: We assist with modernising and operation of the network, particularly in Cairo, making sure they achieve very high performance. We are achieving a performance of about 99.2% of the Etisalat network which is the best they have ever seen.

Hegazy: We have been cooperating with Ericsson since our network launch. It’s a partnership. The recent two agreements we signed with them, included one for the expansion for the current 4G capabilities, and the other was renewal for the managed services for another five years.

Since all Ericsson’s equipment is 5G ready, we are expanding our 4G network while we are also enabling the network to be 5G ready in the same time.

How would the rising costs affect your business and future plans?

Hegazy: Too many events took place in short time, subsidy cut, the devaluation, inflation, interest rate increase, yet this much needed economic reforms were a must. You cannot build a future economy while you are spending on subsidies more than you do on education.

Despite the decrease in purchasing power, but the reforms are paying off. Personally, I am optimistic, I cannot disclose our exact financial results, but I can tell you that 2018 would have much improvement in profit growth year-over-year, the other operators are also doing well, which means that the telecommunication sector grows with the growth of the economy, much like the financial sector.

One of the challenges is the government decision to introduce EGP 50 state development fee on new lines purchases. We think that this is one of the things that should be reconsidered, as it had slowed down the sales of all operators and affected the fourth operator the most.

How do you see the Egyptian market after launching a fourth mobile operator?

Hegazy: We have very good relations with the fourth operator, which we host on our network, as it relies mainly on Etisalat for data, and exclusively on us for voice, we believe that competition is beneficial for the customer.

As a company, what do you prioritise to increase revenues?

Hegazy: we are focusing on data, since we started, we have been always focused on the progressive youth, for which the data usage is very important, and we will continue to offer tailored solutions for our customers.

We have the completely digital tariff where the customer can tailor his plan completely on the application, which we are the only operator that are offering that.

Ration cards will not be withdrawn from eligible beneficiaries: Meselhi

Middle East, Africa to have 30m 5G subscriptions by 2024: Ericsson

Ericsson’s AI, automation will pave way for future of networks at Mobily

Middle East aspires to be at forefront of 5G, not left behind: Johansson