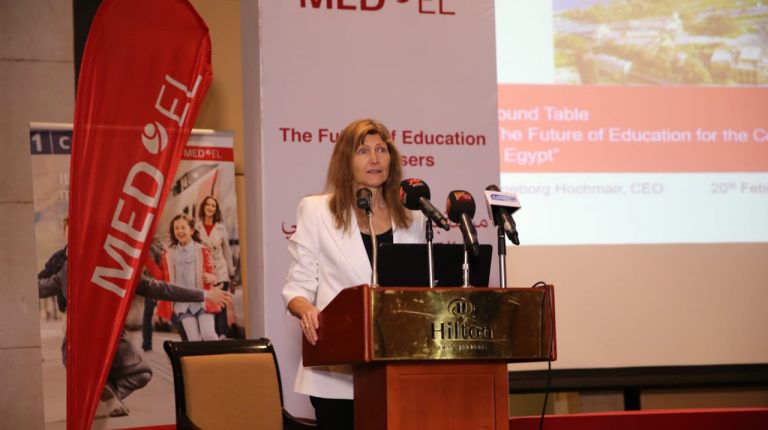 MED-EL, a global technology company, in cooperation with the Austrian Federal Economic Chamber (WKO) organised “The Future of Education for Cochlear Implant Users in Egypt” roundtable, following the visit of a high-level Austrian delegation to Egypt from 18 to 20 February.

The roundtable was sponsored by the Austrian Ambassador to Cairo, Georg Stillfried, with the participation of MED-EL International CEO, Ingeborg Hochmair.

The discussions were moderated by Ahmed Sameh Farid, former minister of health and president of the University of New Giza. Among the speakers was Ingy Mashhour, the minister of education adviser for special education; Hossam Abdul Ghaffar, secretary-general of the Higher Council of University Hospitals; and Sohair Abdel Hamid, chairperson of the Health Insurance Authority.

According to Hochmair, MED-EL has taken continuous action in providing rehabilitation services and extensive information materials to support children and students with hearing impairment as well as their parents. “We are working diligently in Egypt to ease the integration of children in schools and universities, so that together we may build a brighter future for cochlear implanted children in Egypt,” he added.

“By 2050, more than 900 million people – or one in 10 people – will experience hearing loss. Cochlear implants in Egypt costs between EGP 160,000 and 200,000 and despite the decision to increase the contribution of health insurance to EGP 90,000 instead of EGP 45,000, the problem still persists for thousands of low-income families that cannot afford the remainder of expenses that exceed EGP 70,000,” said Farid.

On the other hand, Mashhour explained that the government has begun more than a year ago on the ground to secure the needs of hearing impaired children and to integrate them into society and raising awareness of students.

During 2018, the Ministry of Education launched four training programmes to train 6,000 teachers and therapists under the supervision of the Central Administration for Special Education Affairs and with the support of the European Union and UNICEF, stressing the importance of combined efforts between the public and private sectors, as well as civil society organisations to achieve all the desired objectives.

In the same context, Abdel Ghaffar emphasised the importance of integrating the hearing impaired and cochlear implant users in the community, as well as the need for university hospitals and universities to cover all expenses for the treatment of hearing-impaired students.

Civil society dialogues over constitutional amendments kick off on Tuesday