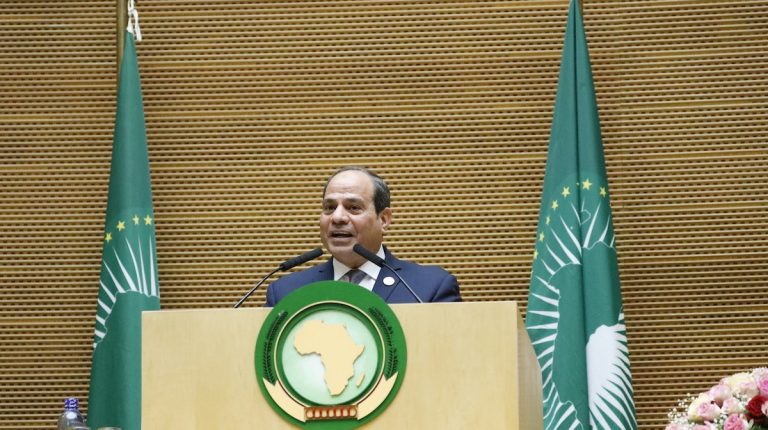 The Egyptian President and the African Union’s (AU) Chairperson, Abdel Fattah Al-Sisi, took part on Monday in the third closed session of the 32nd AU Summit in Addis Ababa.

The session included adopting a number of African legal instruments projects which were proposed during the summit, and the endorsement of the AU’s member states’ nominations for the union’s agencies.

“I held my first bilateral meeting with the chairperson of the union, Abdel Fattah Al-Sisi, this morning,” Faki tweeted on Monday, adding that consolidating the reform agenda, economic and social development, integration, as well as peace and security are among the priorities of Egypt’s chairpersonship.

Earlier at the opening session, Faki expressed his belief that Egypt’s chairpersonship of the AU will push the union forward, expressing his excitement to build on the continental priorities under Cairo’s leadership.

The 32nd AU Summit kicked off on Sunday in Addis Ababa with the participation of 55 African countries.

This year’s theme is: ‘Year of Refugees, Returnees and Internally Displaced Persons: Towards Durable Solutions to Forced Displacement in Africa.’

The summit focuses on institutional reforms and the establishment of a continental free trade zone in Africa.

The Continental Free Trade Area was adopted during the AU 18th Summit in 2012. It aimed to “bring together African countries with a combined population of more than one billion people, and a combined gross domestic product of more than the US $3.4tn,” according to the AU’s official website.

On Sunday, Al-Sisi delivered a speech before the general session of the AU. He called for the creation of more job opportunities and encouraged investments. Additionally, The AU’s chairperson emphasised the need to tackle the ongoing challenges in Africa, especially terrorism.

The Daughter of the Nile: The TCC’s women empowering exhibition