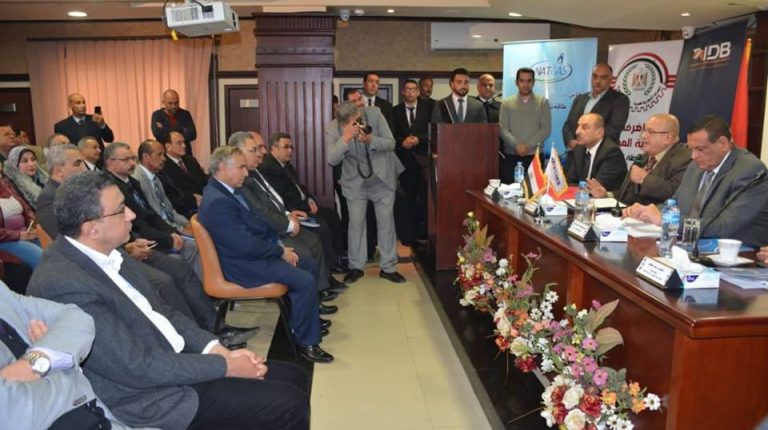 The Industrial Development Bank (IDB) has signed three cooperation protocols with the Beheira governorate, the Chamber of Commerce, and Nat Gas, to support small and medium-sized enterprises (SMEs) and the delivery of gas and utilities to different areas.

The new protocols aim to support and finance the industrial parks and areas of the governorate, finance the business incubators of the intermediate industries, create jobs and support entrepreneurs with efficiency and ambition, and encourage exports.

According to Amna, this cooperation comes within the framework of the state plan to cooperate with national banks in financing development projects, and to absorb the increasing labour, stimulate economic growth, accelerate its rates, support economic and social development.

He pointed out that the bank will finance the areas and industrial complexes in the governorate, and the areas to be established in Hush Isa, Rashid, Edku, Nubaria and Kom Hamada, in addition to financing the delivery of services and public utilities at a simple cost and easy payment plans to ease the burden on citizens.

According to Fahmy, the new cooperation protocol comes in continuation of the bank’s role and its great experience in supporting industrial areas for 70 years since it was founded in 1947.

He added that the protocol stipulates that the bank will put all its resources to finance SMEs, whether existing or new projects, within the initiative of the Central Bank of Egypt (CBE) with a simple interest of 5 and 7%.

Fahmy stressed that the bank is keen on supporting productive and industrial projects, which cover the needs of the market, in order to save foreign exchange, as well as support exports. It will also finance the delivery of facilities and services such as drinking water, sewage systems, gas and electricity.

For his part, Azzam pointed out that the protocol includes the provision of credit facilities to finance and support business incubators for the establishment of intermediate and feeding projects for major industries in various fields in the governorate, especially textile industries in Kafr El Dawar, and agricultural production industries.

Azzam pointed out that the bank has already cooperated with Beheira, where it managed to finance the first commodity exchange for vegetables and fruits in Egypt and the Middle East, which is located on an area of 57 feddan in Badr City, and accommodates 120 exhibitions, 680 companies, 130 refrigerators, and 50 export terminals.

According to Azzam, the total funds directed to the clients of the exchange amounted to EGP 150m. The bank is considering providing more funding.

According to Tarek Gala, director general of Small Projects and head of the Credit Zones at the IDB, the third protocol signed with Nat Gas includes the financing of the delivery of natural gas to industrial projects, bakeries, and SMEs as part of the CBE initiative.

He added that the IDB was one of the first banks to support the financing of the delivery of gas to housing units, and then to industrial units as a right for every citizen. The bank has already signed three agreements with Nat Gas, Fayoum Gas, and Sina Gas to finance the delivery of natural gas to 375,000 units, with a total funding of EGP 675m. So far gas has reached 121,000 units in Alexandria, Fayoum, Beheira, and Sharqiyah at a cost of EGP 310m.

IDB grants EGP 50m to Tamweely Microfinance to re-lend to projects for low-income groups, most vulnerable