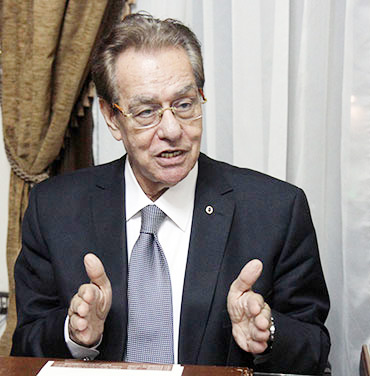 As former governor of two large governorates, Qaliubiya and Menoufiya, and someone who contributed in drafting the new local community management bill, Adli Hussein introduced an integrated vision of the forthcoming bill, depicting the monitoring roles it includes.

Hussein also explained in an interview to Daily News Egypt how the absence of elected local community councils since 2011 till now has not only negatively impacted the economic scene in Egypt, but equally the megaprojects which have been established throughout the past four years.

The transcript for the interview is below, lightly edited for clarity:

How much does the constitution support governorates and their local activities?

The 2014 constitution carefully deals with local development. The constitution supports it with decentralisation financially, administratively, and technically in order to enhance the role of community councils in each governorate. Plus, it provides these councils with full autonomy to enable them to play their roles without any restrictions or burdens. In addition, according to the constitution, the decisions and resolutions that are released by these councils are irreversible. But, actually, the new bill sets only three condition to for opposition. They are in the event if those decisions are against the public interest, or are illegal, or if they conflict with other resolutions released by other community councils. Moreover, it ensures that the election is be the method of the governors’ appointment.

From your perspective, why has this bill not been released yet?

To what extent has Egypt been affected by the absence of local councils in all governorates?

These elections are the main means of acquiring the experience of political practice in Egypt. Actually, it supports the democratic composition to the point where its role is more important than the parliament itself, as these entities and its elected members directly stay in touch with citizens, and deal with their troubles and complaints on a daily basis. Furthermore, the new bill adopts interpellation as a measure to interrogate officials who are responsible for any dereliction, including the governor himself. Thus, the formation of local community councils is an important guide for political practice, and the democratic process is in dire need for it. Actually, Egypt has not experienced similar elections since 2011.

But it has been a very long period, so, what is the impact of this situation during this extended time?

In contradiction with the constitution and law, since the dissolution of these councils in the wake of 25th uprising in 2011, all governorates are acting without their local councils, although the constitution and the existing law provide for forming interim councils in case of the dissolution of existing ones. It has not been happened till now, hence this case is a deeply unconstitutional and a legally flawed condition.

What can concerned bodies do to avoid this complicated situation?

Unquestionably, we must promptly form interim councils to avoid this unconstitutional and illegal condition. In addition, these interim councils will support governors to perform their duties. Furthermore, they are responsible for any oversight concerning the governor’s performance.

What about the impact, in particular on the Egyptian economy, especially on the reform programme?

Unfortunately, the absence of these councils has significantly harmed Egypt’s economy. Land allocations, budgeting, imposing local activity fees, approving the establishment of new projects in governorates, and oversight of the governor’s duties are essential roles of these councils. Thus, all governorates have suffered in their absence. In addition, it has a negative impact on sustainable development in governorates which is the key issue of the Sustainable Development Strategy Egypt 2030, definitely affecting the investment environment.

Does it mean that these councils have a major role?

That is right. Members of these councils, depending on their daily connection with people, would have a mission in persuading them with the new economic procedures which include serious ones for citizens’ daily life such as the floatation of the Egyptian pound, phasing out energy resources subsidies, increasing service fees, and other similar procedures. That would have played a significant role in this regard, which, eventually, would help the government to keep operating smoothly. Their role is more important than the role of the media or even the parliament.

As a participant in drafting the new law, what are the monitoring tools that were included?

The oversight tools that are insured by the new bill, included questioning, requests for briefing, and interrogation, which are vital for reproaching negligence to the extent that governors can have confidence withdrawn from them. What’s more, the key issue is that the new bill devotes an entire section for Cairo as the capital city with a special condition on the grounds that is the ruling centre and the headquarter of most ministries and governmental bodies. Moreover it is the most populated and most vital city, in a manner which distinguishes it from other governorates. This is the model which is followed in all developed countries such as France, Brussels, and London. Thereby, this is a good step forward as it secures more powers and competencies.

What about qualifying personnel in these local communities to become competent leaders for local councils?

A new national academy is supposed to be established according to Article 10 of the new bill, for all who work in local communities and all who intend to run for local council elections, in addition to qualifying personnel to assume leadership posts. This would bring an end to depending on assigned employees from ministries or departments to work in local councils.

How will these instruments facilitate the work of these councils?

They will provide the chance for governors and local councils to work more independently; approve new projects and establishments; offer economic incentives for investors; boost small, medium, and micro enterprises, and promote investments in each governorate. In this regard, I would like to mention a successful instrument which attracts investments that I had applied when I was a governor of Qaliubiya, which is Fraternities Agreements. This instrument allows for the cooperation and exchange of experiences between Egyptian local councils and their counterparts in other countries. I wish that the final draft of the new law would allow for these kinds of agreements.

As a former governor, can you estimate local community activities’ contribution to the national income?

And how do local councils support the megaprojects which have been established?

These megaprojects are supposed to open branches in some of the Egyptian governorates which could pave the way for new investments in these governorates, followed by offering new job vacancies. In this regard, the local councils have a role to remove obstacles which restrict these new investments.