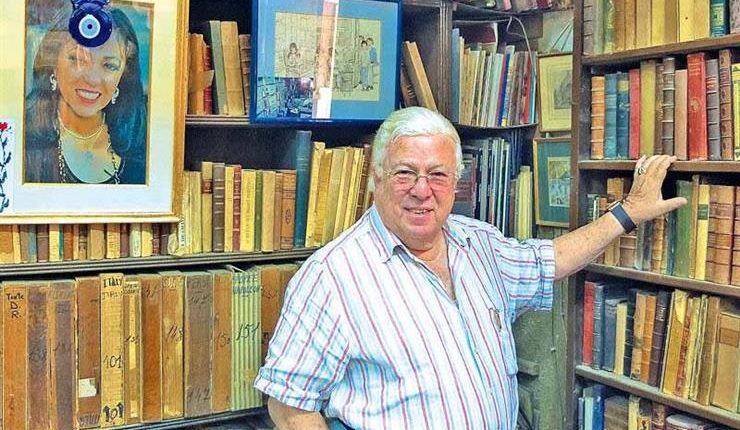 A few days after the controversy of the late artist Hassan Kamy’s library incited the media, the  Bibliotheca Alexandrina decided to put an end to it. It announced that it reached an agreement with Kamy’s family to purchase all the rare, original books, portraits and encyclopaedias the L’Orientaliste  (Al Mustashrek) Library has, once their conflict on who owns it ends with Kamy’s lawyer.

Following Kamy’s death, his lawyer Amr Ramadan, appeared on public media saying that Kamy sold him his library a few years ago without telling anyone, raising several questions as to who is the actual owner of the library.

Ramadan said that Kamy due to his unstable financial situation, sold him the library, however, Kamy’s family members and friends deny that story.

Egypt’s biggest libraries, chronologizing both Egypt’s recent and ancient history, issued a statement on Sunday in which they stated that an agreement between two parties was reached after discussions in which it was decided that the belonging of Kamy’s library are to be sold to Bibliotheca Alexandrina.

Moustafa El-Fikky, director of Bibliotheca Alexandrina, said that L’Orientaliste is full of gems, and it has always been central to Alexandria’s library, especially with the “extreme rare books it contains such as Wasf Masr (Description of Egypt) which was written by the French campaign in Egypt in the 18th century”.

El-Fikky said in a phone call to the ‘DMC Evening’ evening show, which airs on the privately owned DMC TV channel, that the Bibliotheca Alexandrina signed a pre-settlement with Kamy’s family members stipulating that it will buy the contents of Kamy’s library once they prove their ownership of it, adding that he had never heard before of the alleged lawyer and his purchasing of the library.

He continued to explain that the agreement states that the family will keep anything personal in the library and the rest will be sold for display in the Bibliotheca Alexandrina.

Furthermore, El-Fikky added that if the conflict between both sides is in favour of the lawyer, then, “authorities will interfere in that case, as the country is the real owner of such important authentic documents.”

Moreover, he stated that he and his colleagues used to visit Kamy’s late wife, Nagwa, who previously owned their library, to walk through and discover the rare documents the L’Orientaliste contains.

L’Orientaliste library contains some original copies of rare publications which do not exist elsewhere, including parts of a rare book titled “Wasf Masr” (Description of Egypt) of which only a few copies exist in the whole world.

It also has, according to one of Kamy’s friends, the five parts of the Scottish traveller’s James Bruce 18th century book in which he detected and documented the origins of the Nile.

L’Orientaliste contains some remains of the rare atlases, whose other copies were burned in France during the WWII.

The 19th century old library was built by the hands of a Jewish traveller who wanted it to be a source of rich information for world travellers.

Local media states that the library contains around 40,000 books and portraits.

Kamy passed away Friday morning at the age of 82, leaving behind a rich legacy of artistic heritage.

Belongings of Hassan Kamy’s Library to be sold, donated