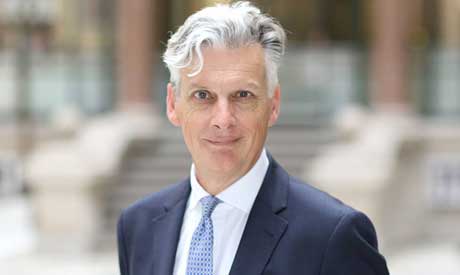 Sir Geoffrey Adams, British ambassador to Egypt said that his country targets to establish a new trade agreement with Egypt by the end of 2020 following Brexit of the EU, affirming his commitment to take the bilateral relations with Egypt to the next level.

“I am very optimistic about boosting the economic and business aspects with Egypt,” noted the ambassador during his speech at an event, organised by the British Egyptian Business Association (BEBA) in the honour of Sir Adams who is newly appointed as the UK ambassador to Egypt in September.

The ambassador mentioned that his country heavily invests in Egypt in the sectors of oil and gas, adding, “we will continue investments. Egypt has a good geographical location and we inked several Free Trade Agreements with African countries which create a potential for us to reach very interesting markets.”

The future trade agreement will benefit both countries, asserted the ambassador, noting that the Egyptian market is very massive, and its competitive fruit and vegetables are welcomed into the British market.

Moreover, the ambassador highlighted that Egypt’s regulatory framework is often challenging and hazy especially regarding customs, and asserted the importance of simplifying the procedures.

The ambassador indicated that UK tourist numbers to Egypt are increasing as well as the other nationalities’ tourists to Egypt, adding that there are about 51 direct flights from Britain to Egypt.

“Tourism is a famous problem. However, tourists’ figures show a very encouraging trend. We continue the discussion of resuming flights to Sham El-Sheikh with the Egyptian Ministry of Tourism which is going in a positive direction,” said the ambassador, adding that Egypt’s government is promoting the county through beautiful campaigns.

Meanwhile, the ambassador said that he is discussing the updates of the Palestine case with his Egyptian counterparts in particular about Gaza, noting that discussions aim to solve the issues.

“Many things were changed since I was here in 2001, so I am trying to listen from all about the country, after my meeting with President Abdel Fattah Al-Sisi, I met many ministers, and with most of them we have extremely important relations,” mentioned the ambassador.

Previously, from 2001 to 2003 the new UK ambassador was the consul general in Jerusalem, and from 1998 to 2001, he was the deputy head of the UK Mission in Cairo, and initially he joined Her Majesty’s Diplomatic Service in 1979.