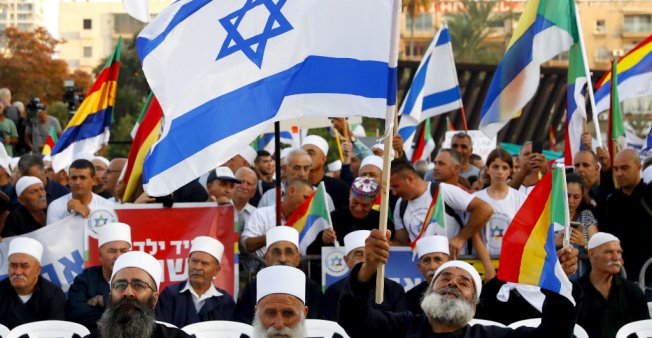 The latest updates in the Levant, particularly in Syria and Israel, brought to the surface the discussions about an Arab group which has distinct relations with Israel: the Druze.

The community forms a vital part of the Israeli community and army, as Israeli officials used to say.

However, lately, the relation between the two allies has become strained after a new Israeli legislation. Also, the recent Israeli municipal election aroused controversy in the Syrian Golan Heights which is under Israeli rule, particularly after the escalation of the Syrian civil war.

Some believe that the Druze are an offshoot of Islam. Yet, the Druze’s clerics are often ceasslessly heard repeating that they are a ‘separate nation’. Furthermore, the Druze do not bemoan anyone who leaves the group nor do they welcome newcomers, according to Syrian Druze cleric Fayez Al-Hodaify in a televised interview. 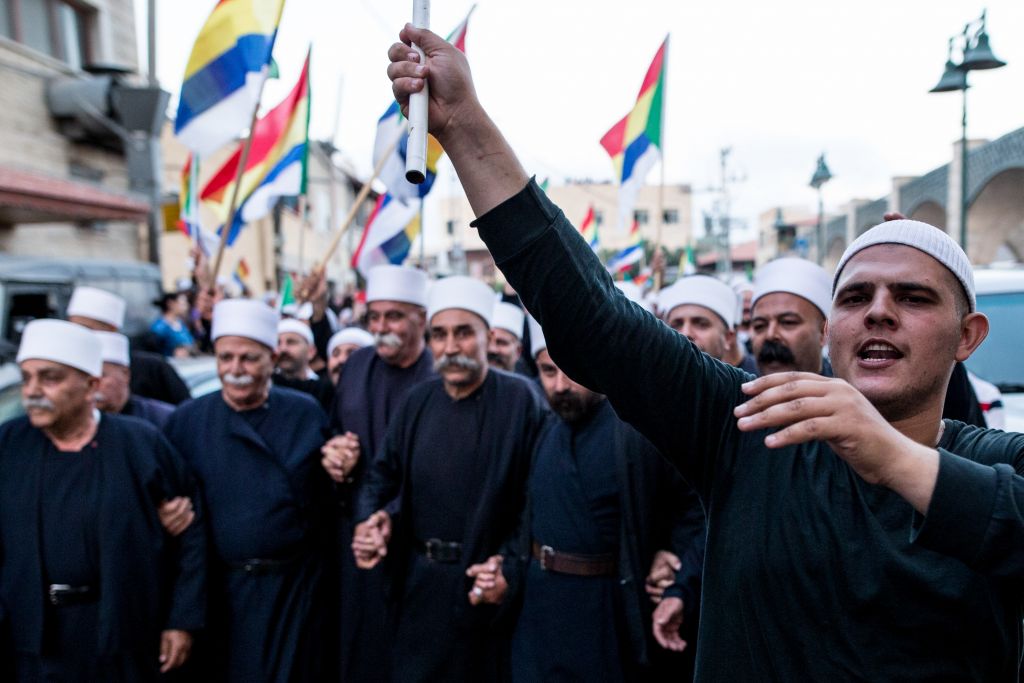 They decided to engage with any authority which governs their areas, as Farid Khaddaj, the Durze writer said in an opinion piece published in September 2017.

The Druze community is divided between three countries: Syria with 800,000 inhabitants, Lebanon with 450,000 inhabitants, and Palestine with 120,000 inhabitants in the occupied territories. They speak Arabic and self-identify as Arabs, but their religious beliefs split from Islam in the 10th century in Egypt, believing instead in Al-Hakim bi-Amr Allah as the16th Ismaili imam and Fatimid caliph.

Druze religious literature is said to be only accessible to a group of religious initiates called the ‘Uqqal’ which translates to mean a group of wisemen.

Israel has taken a new step further towards the Golan Druze, after the Israeli decision to invite the Druze community into the occupied Syrian Golan Heights to vote in the Israeli municipal election which was held last week, for the first time since Israel occupied the Syrian Heights 50 years ago.

Controversy rose among the 23,000 Druze community in the Golan Heights. Most people there still see Syria as their original country. Some of the residents changed their minds lately after the civil war in Syria took a more disruptive turn following the 2011 uprising.

The Druze in the Carmel and the Galilee areas in occupied Palestine, are Israeli citizens, so they have the right to vote and run the election, however, most of the Druze in the Golan Heights are Syrian citizens but hold permanent resident status in Israel.

The election was held on schedule in the Golan, but the process was not easy for Israel as hundreds of Druze Arabs carrying the Syrian flags gathered outside the gates of polling stations, trying to block their people from voting in the election, while Israeli police was firing tear gas to disperse the protesters.

Protesters chanted against Israel, calling themselves Syrians, and shouting “the Golan’s identity is Arab and Syrian,” and “No to elections.”

Despite the vast boycott of the election, there were also calls in the region to integrate with Israel, citing the chaotic status of living conditions currently in Syria and previously in Palestine.

One of voters, who decided to integrate with Israeli society, told Reuters on condition of anonymity, that “It’s my right to vote. I’m free to choose the right person.” But this will not pass, according to prominent Druze cleric, Sheikh Khamis Khanjar, who stressed that a societal punishment will be applied on participants.

“Candidates and those who come to vote will have a religious and social prohibition placed upon them,” Khanjar said.

“What bigger punishment is there than this?” he added. 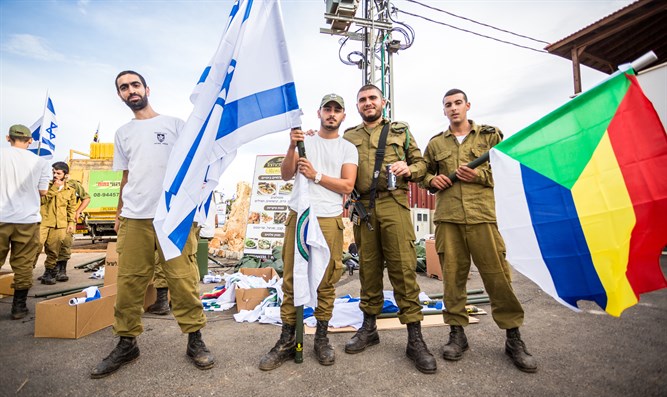 Analysts believe that the Israeli move is not for the sake of the Druze. They argue that Israel is using the turmoil in Syria as a pretext to support its claims of sovereignty over the Golan Heights and its water resources. Over one-third of Israel’s water supply comes from the Golan Heights.

Israel occupied the Golan Heights in 1967 following its victory over the Egyptian and Syrian armies. In 1981, Israel annexed the territory in a move that is not internationally recognised until today.

According to a new report from the Foreign Affairs Magazine “the Golan Heights offers access to two major water systems: the drainage basin of the Jordan River and its tributaries to the west, and Lake Tiberias and the Yarmuk River to the south.”

The Syrian region has also more than 200 springs and scores of streams, which Israel impounds several of them in reservoirs for its settler use.

Israel is working on the region’s infrastructure. Since 1984, it has built over eight deep wells to access Syrian aquifers. “Combined, these wells have extracted more than 2.6bn gallons of water, which are mostly pumped to settlements for unfettered access,” read the report.

However, last week’s elections were not the first interaction between Israel and the Druze. Relations between the two has a history, and the Druze’s loyalty for Israel existed even before the establishment of Israel itself in 1948, when Palestine was under the British mandate.

At that time during the beginning of conflict between Arabs and Jews over the land of Palestine, Druze villages were said, according scholars, to be neutral and did not take part in the Arab resistance.

The Druze’s loyalty to Israel is believed to have happened due to the absence of a mother nation for them to follow, unlike other similar groups in the Middle East.

Historically, the Druze suffered a lot from their other Muslim neighbours amid isolation and accusations of distorting Islam and inserting new beliefs into the religion.

But soon, Druze leaders decided that it is better for them to take the Jews’ side as Muslims in Palestine did not consider the Druze as Muslims, according to a 2017 report from the US-based Middle East Policy Centre. The report added that formal contacts between the Druze and the Jewish leadership took place as a result.

Moreover, the Israeli-based Druze Zionist Council describes relations between the Jews and the Druze to “have strengthened,” leading to the creation of what was later named as the ‘Druze Zionist’ movements, who are in favour of the state of Israel.

Historians wrote that relations between Israel and the Druze was dubbed as a ‘Blood Brotherhood’, a description that was given to the Druze-Israeli alliance after the 1956 agreement between the two sides. In the late 1950s, this agreement caused more integration steps by the newly formed Israeli state, who began accepting Druze soldiers into the Israeli army even in high ranks. 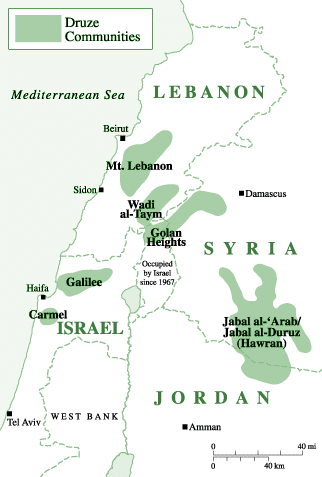 Stab in the heart

But recently, relations between Israel and the Druze strained after the Israeli Knesset approved in July of this year, the Jewish nation-state law which defines Israel as the sole Jews’ national state. According to the new legislation only Jews have the right of self-determination in Israel.

For the Druze community who hold Israeli nationalities it was a stab in the heart from Israel’s old Arab allies in the North, as the new law excludes Arabs (including Druze) from the Israeli identity.

Despite their fight alongside the Jews during the Arab Nakba war in 1948, the Druze got the same treatment and discrimination as other Arabs inside Israel, and were not excluded from the law.

Publicly, they rejected the law, and their leaders held several meetings with Israeli leaders and ministers including Prime Minister Benjamin Netanyahu, yet to no avail, they remained excluded from the Israeli nation like all non-Jews.

The two parties, Israel and the Druze are in ongoing discussions regarding the law, but until present day no meeting outcomes have been announced amid Israeli insistence on the Jewish identity of the state.

Nevertheless, the coming days will reveal to whether the so-called ‘Blood Brotherhood’ will stand the test of time or will trail.

Palestinians under attack in 73rd anniversary of Nakba Day

Brazil to move embassy to Jerusalem

Op-ed review: Support for Saudi Arabia in the Khashoggi backlash