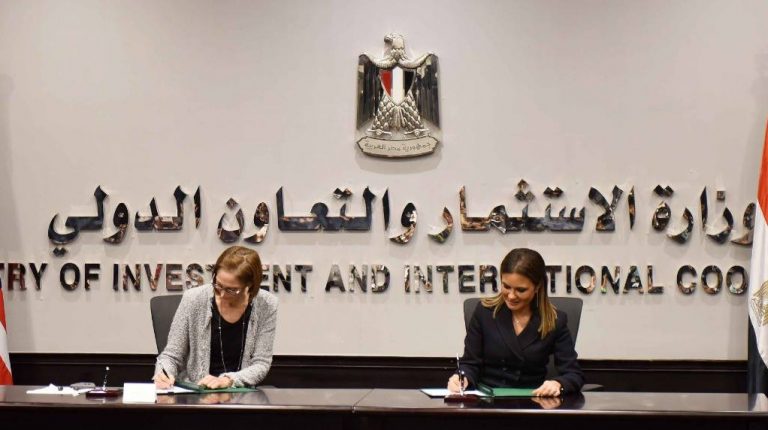 Egypt’s Minister of Investment and International Cooperation Sahar Nasr, signed on Monday with the director of the United Sates Agency for International Development (USAID) in Egypt, Sherry Carlin, an agreement for the second stage of infrastructure support with a total grant of $65m.

The minister explained that the agreement included supporting the infrastructure in rural areas in seven provinces of Upper Egypt, which are Assiut, Sohag, Qena, Luxor, Aswan, Beni Suef, and Minya, mentioning that the number of beneficiaries from this agreement are estimated at 1.1 million people from the population’s neediest segment, which suffers economically in rural areas.

This agreement aims to raise the quality of services provided to citizens by paying more attention to the basic services that should be provided to the regions and villages that have been deprived from these services for decades, noting that this will contribute to reducing the spread of diseases and bringing about the necessary health care, which is also a level of investment, but in terms of a human element, Nasr pointed out.

For her part, Carlin stated that in support towards the Egyptian government’s strategic vision for water and sanitation reform, the USAID will provide technical assistance with a focus on operational efficiency and service quality.

“The USAID programme in Egypt, which has exceeded more than $ 30bn, aims to support the health, education, and employment services provided to the Egyptian people,” she explained.

For 40 years, the American people have been partners with the Egyptian people to improve self-reliance systems, economic growth, and poverty reduction, Carlin noted.

“Regarding the water sector, more than 25 million people are receiving clean water and sanitation through the USAID-funded systems,” she concluded.

US invested over $100m to conserve Egypt’s monuments, masterpieces over 23-years-old

Youth’s big problem: Motivation to work catalysed by fear instead of love