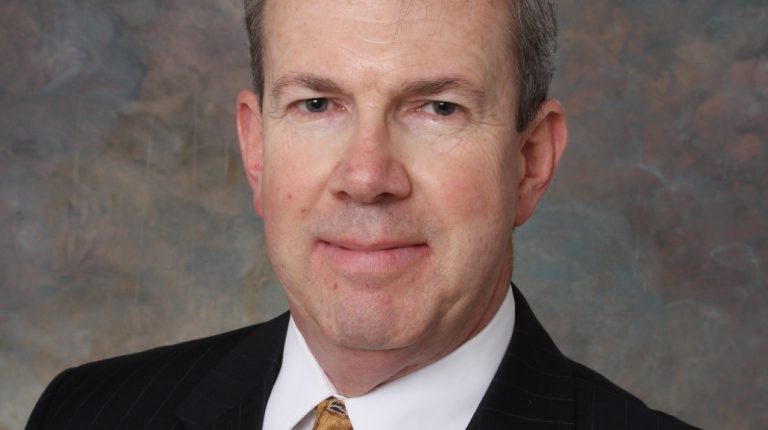 ,tMoreover, Dunn noted that his company is looking for opportunities to expand its University Engagements in Egypt, but nothing has been finalized yet. “We had a great meeting with the Egyptian president Abdel Fattah Al-Sisi,” he said, adding, “we continuously look at ways to partner with educational institutions with strong engineering programmes. Cairo University was our first and we hope to expand our outreach.”

Moreover, Dunn added that Boeing has developed strong partnerships with industrial and manufacturing companies in the region, noting, “an example of how Boeing partnered with local companies to boost manufacturing in the region was the agreement with Saudia Aerospace Engineering Industries (SAEI) and Alsalam Aircraft Company to create the Saudi Rotorcraft Support rCentre in the Kingdom of Saudi Arabia.

Daily News Egypt sat down for an interview with Dunn, the transcript for which is below, lightly edited for clarity:

How do you assess bilateral cooperation with Egypt over past years?

Boeing’s relationship with Egypt spans more than 50 years, starting with our first agreement with the national carrier in 1966. Back then, EgyptAir ordered three Boeing 707s, the first of which was delivered in 1968. Since then, Egyptian carriers have ordered a total of 57 Boeing aircrafts, 53 of which were ordered by EgyptAir.

Today, EgyptAir continues to be a valued customer, with Boeing airplanes comprising the majority of the airline’s fleet. Currently, EgyptAirR’s in-service Boeing fleet is a mix of single-aisle and twin-aisle aircraft: 6 777-300ERs and 29 737-800s. EgyptAir’s Next-Generation 737 fleet is one of the largest of its type in the region.

Additionally, EgyptAir has agreed on deals to include Boeing’s next generation aircraft, including a deal signed at the Dubai Airshow, when the airline agreed to lease six 787-9 Dreamliners from Dublin-based AerCap and at the Farnborough Airshow in 2016, where EgyptAir ordered nine Next-Generation 737-800s.

Since then, the Egyptian military has used many Boeing products including Apache and Chinook helicopters, the Avenger short-range air defence system and Harpoon missile systems.

Are there any arrangements for additional meetings with President Abdel Fattah Al-Sisi to follow up on first meeting?

We had a great meeting with the president and we are working hard to maintain a good relationship with the Egyptian government, community, and industry.

On 18 April President Al-Sisi met with  Boeing’s President Marc Allen to discuss Egypt’s keenness on promoting cooperation with Boeing International Company, attending the meeting were Minister of Civil Aviation Sherif Fathy and Bernard J. Dunn, Boeing’s MENAT president, according to a previous statement of the presidency.

What about developments of current defence deal negotiations? Are negotiations going well at least?

We do not comment on any ongoing negotiations with customers.

tNotably, Dunn told Egyptian local media, on May, that his company mulls setting up an office in the Egyptian market for the first time, adding, “we are working on a major defence deal and if we win it, we will open an office in Egypt next year.”

Do you expect Boeing’s new office to be in  New Administrative Capital or Cairo Airport or any other location? What is average expected amount of investments that are needed for establishing an office?

We are in the planning stages.

When will Boeing start its planned new project with Alexandria University? And what are initial details about that new cooperation?

We are currently looking at opportunities for expanding our University Engagements in Egypt, but we do not have anything finalized yet.

We continuously look at ways to partner with educational institutions with strong engineering programmes. Cairo University was our first and we hope to expand our outreach.

What are main accomplishments of Boeing’s cooperation with Cairo University and its plans for boosting it?

In 2016, Cairo University joined Boeing’s University Relations programme, in which we initially supported the Aeronautical Engineering programme. While that support will be reiterated in 2018, our relationship with Cairo University goes beyond the support of individual programmes, such as the Charitable Grant funds donated to the university, which have been used to support 25 students working on  STEM (science, technology, engineering, and mathematics) graduation projects, including a flight simulator, a weather balloon, and an aircraft accident software, as well as aviation books and education kits, serving more than 200 students.

Funds have also supported the department’s project fair for the entire Aerospace Engineering student body, as well as outreach events to reach 150 preparatory and secondary school students to raise awareness about aerospace engineering.

What is testimated budget for Egypt’s CSR activities? How many projects does Boeing implement in market andH how many are planned to start in future?

Boeing has supported Egypt with charitable contributions since 2007. We have established and implemented several initiatives, in partnership with a variety of organizations in Egypt, with a focus on  STEM education, employability skills, workforce development and job creation specifically entrepreneurship.

Boeing has a multiyear collaboration with Injaz Egypt on a programme called Start Up, which takes a sustainable, long-term approach to entrepreneurship. As part of the programme, start-up teams receive training opportunities and mentors to assist them in fine-tuning their ideas into viable business concepts. To date, Injaz Egypt has empowered 1,135 entrepreneurs and facilitated the launch of 70 start-up businesses and 10 revenue-generating companies.

Boeing also supports World Learning, an international non-profit organization, existing efforts to help the Ministry of Education in Egypt enhance STEM education in public preparatory schools nationwide. Boeing has collaborated to bring Curiosity Machine, an engineering-focused design programme, to Egypt. With Curiosity Machine, families and teachers participate with the students to complete hands-on science and engineering projects, which develop skills like creative problem solving and persistence—important skills for future study or work in a growing field like aerospace.

Another collaboration is with Education for Employment (EFE), an organization that delivers demand-driven job training and placement programmes that link youth directly to employment opportunities. The youth employment-services programme targets unemployed youth aged 18 to 30 from public universities or local technical training institutes and from marginalized backgrounds. With Boeing’s support, 100 young Egyptians in greater Cairo will receive training and links to job opportunities this year and 350 job-seeking, underprivileged Egyptian university students in greater Cairo will be equipped with employability skills in EFE’s Career Directions programme.

We also work with two organizations to help those with disabilities develop critical employability skills. We work with Light & Hope organization and supported over 200 blind women and The Deaf Centre to help unify sign language in Egypt as it correlates to Arabic.

Is annual charity event in Ramadan only CSR cooperation with local airline carrier?

Our relationship with EgyptAir is multifaceted and has grown to include the annual volunteering event for employees and our partners to spend time with the community and an additional programme to complement our ongoing CSR efforts.

What is Boeing’s budget for R&D? Are there new projects you are planning within this context?

Boeing R&D is being focused on improving affordability, productivity, and sustainability of our products and services. Innovation is key for this, both in terms of technology and processes.

How do you see company’s activities in Middle East region?

Boeing’s relationship with the Middle East region dates back more than 70 years to when US President Franklin D Roosevelt presented a Douglas Aircraft DC-3 Dakota to King Abdulaziz Al-Saud of Saudi Arabia in 1945. We have strong regional customers on both the commercial and defence side.

On the commercial side, 700 Boeing airplanes are currently operated by airlines in the Middle East and the region and we forecast that the region will need 3,350 new airplanes over the next 20 years. Boeing’s airline customers in the region include Emirates, Etihad Airways, Qatar Airways, EgyptAir, flydubai, ALAFCO, Oman Air, Gulf Air, Dubai Aerospace Enterprise, Saudi Arabian Airlines (Saudia), and Royal Jordanian.

Boeing Business Jets (BBJ) has a long-standing presence in the Middle East region, which represents the largest combined market for BBJs (31%) and Boeing’s widebody VIP airplanes. Of the 20 orders for the 787 and 747-8 VIP airplanes to date, 11 have been bought by customers in the region.

We have also formed a number of strong industrial relationships and partnerships across the region.

Another example of how Boeing partnered with local companies to boost manufacturing in the region was the agreement with SAEI and Alsalam Aircraft Company to create the Saudi Rotorcraft Support Centre in the Kingdom of Saudi Arabia. The joint venture will have locations in Riyadh and Jeddah providing comprehensive, in-country maintenance repair and overhaul support for Saudi Arabia’s diverse rotorcraft fleet.

ACC to reschedule its outstanding debt with EBRD, CIB

No fake certificates for Egypt’s universities: Ministry of Higher Education

Global market is forecast at almost 43,000 new airplanes through 2038: Boeing

New educational system to be implemented next September: Shawky