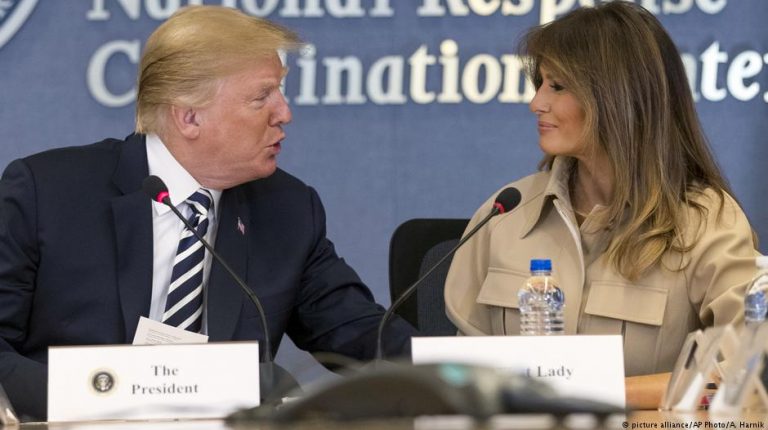 US media had speculated about Melania Trump’s whereabouts after she failed to make a public appearance after kidney surgery. As she sat next to President Donald Trump at a briefing, her husband said “she’s doing great.”US first lady Melania Trump made her first public appearance on Wednesday since shortly before undergoing kidney surgery in mid-May.

“She went through a little rough patch, but she’s doing great,” said President Donald Trump, who sat beside Melania at a briefing from the US emergency response agency. He added: “The people love you … thank you, honey.”

Melania, smiling and nodding, replied with a quiet “thank you.”

‘Vicious to my wife’

Speculation had been rife about the whereabouts of the first lady after she failed to attend multiple public events following her surgery on May 14.

The coverage had irked the president, who wrote in a Tweet earlier on Wednesday: “The Fake News Media has been so unfair, and vicious, to my wife and our great First Lady, Melania.”

“During her recovery from surgery they reported everything from near death, to facelift, to left the W.H. (and me) for N.Y. or Virginia, to abuse,” he added. “All Fake, she is doing really well!”

Melania spent five days in the hospital after the surgery before returning to the White House on May 19. Since then, her staff said she has worked on various projects and attended private meetings.

In response to media speculation, she wrote on Twitter on May 30: “I see the media is working overtime speculating where I am & what I’m doing. Rest assured, I’m here at the @WhiteHouse w my family, feeling great, & working hard on behalf of children & the American people!”