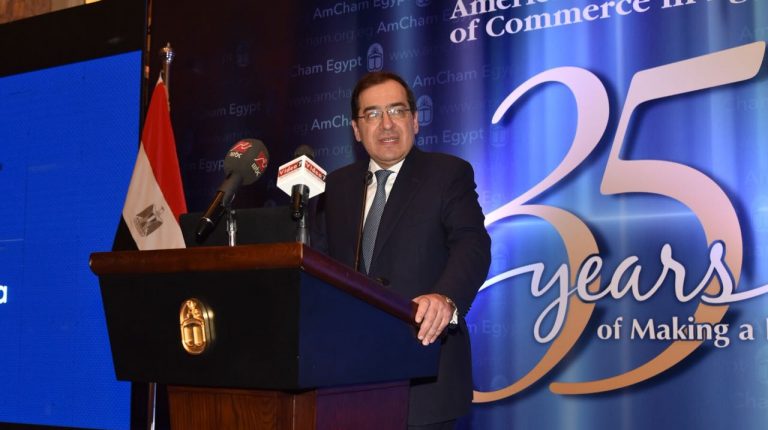 Egypt will sign an agreement with Cyprus to link the Aphrodite field in Egypt in the coming weeks, said Minister of Petroleum and Mineral Resources Tarek El-Molla, adding that his ministry plans to launch two global bids for oil and gas exploration in the Mediterranean and Red Seas this year.

According to El-Molla, production from the Zohr gas field is expected to increase by the end of this year to reach about 2bn cubic feet of natural gas per day, after it recently increased to about 800m cubic feet of gas per day.

During a symposium organised by the American Chamber of Commerce in Egypt (AmCham) on Sunday evening, he noted that the third phase of the field will be completed at the beginning of 2019, explaining that the stages of the field’s development lasted 22 months instead of the planned 27, which he said is a real achievement.

He called 2017 “the year of oil discoveries,” and said it witnessed the signing of important agreements, most notably the agreement on the demarcation of borders between Egypt and Saudi Arabia, saying it was an economic achievement and allows Egypt to begin exploring untapped areas in the Red Sea. “While many talked about Tiran and Sanafir, the agreement boosts the achievements of the oil and gas sector,” he stressed.

According to the minister, his ministry aims to increase foreign companies’ investments to about $10bn by the end of the current fiscal year, compared to $8bn during the last fiscal year.

El-Molla added that one of the most important elements of the major development and modernisation project is to transform Egypt into a regional hub for the trading of gas and oil. The Egyptian government has set out a plan that envisions the country serving as a strategic regional hub for energy, a strategy made according to important factors such as Egypt’s strategic location on both sides of the Suez Canal, opening the possibility for it to transport, store, and trade crude oil and gas.

He noted that Egypt has taken steps to transform itself into a regional energy hub, starting with issuing the new gas law as a first step to reform the gas market, as well as forming a joint committee between the government and members of relevant ministries and agencies to overcome potential challenges.

He pointed out that there are discussions and cooperation with regional partners to achieve the goal in parallel with the EU’s energy strategy, allowing Egypt to work closely with the union. A memorandum of understanding is expected to be signed between the EU and Egypt before mid-2018.

On a different note, El-Molla said that the government is seeking to recover the cost of providing petroleum products in the local market, through increasing crude oil production rates and continuing the plan to cut petroleum subsidies.

He added that the government will continue to provide social protection programmes to coincide with the continuation of the plan to reduce subsidies for fuel, adding that the consumption of petrol during the first nine months of the current fiscal year fell by about 3% compared to the same period of last fiscal year, while diesel consumption dropped by 6%, while fuel oil consumption was reduced by 33%.

According to El-Molla, 2017 witnessed unprecedented results, the most important of which was the start of gas production from four major projects in the Mediterranean Sea, the reduction in dues to foreign partners, and the start of seismic surveys for two potential exploration projects in the Red Sea and Upper Egypt. In addition, the government began preparing to list a share of 11 state-owned oil companies on the Egyptian Exchange.

He also said that his ministry is currently working on seven new projects to increase the capacity of Egyptian refineries to 40m tonnes and improve their efficiency, expand pipeline networks for transporting crude oil and gas, and to optimally exploit Egypt’s facilities in the field of liquefied natural gas on the Mediterranean coast.

He also pointed to the importance of the development and modernisation of the petroleum sector and its various work programmes in raising the level of performance and competitiveness in all fields of the oil and gas industry. It also deals with the electronic linkage of all elements of the petroleum sector as one entity through an enterprise resource planning (ERP) system.

Delegation from 43 US companies to visit Egypt on Tuesday

What is happening in Syria is new Sykes-Picot: military expert