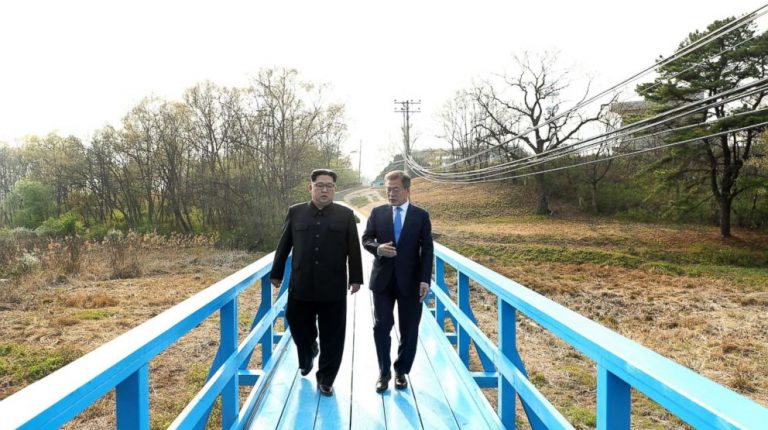 Egypt welcomed on Saturday the preliminary agreements between North Korean leader Kim Jong-un and South Korean President Moon Jae-in, which entailed suspending all nuclear activities, according to a statement from the Egyptian Ministry of Foreign Affairs.

The ministry said that this step is important for “ending tensions in the region and achieving peace.” The statement pointed to Egypt’s constant stance of rejecting the use or threats of using force in international relations.

Egypt’s Foreign Ministry had previously said that Egypt is concerned about the rising tensions in the Korean Peninsula, which intensifies disputes in the region, calling upon the North Korean government to abide by resolutions of the UN Security Council when it comes to testing nuclear weapons.

The countries’ leaders signed a declaration on Friday after the two pledged to work on the denuclearisation of the peninsula and officially ending the Korean war.

In a highly symbolic moment, Kim crossed over the border between the two countries into the Korean demilitarised zone, the most heavily fortified border on the planet, becoming the first North Korean leader to set foot in South Korea.

The two sides further agreed to convene military talks between their generals in May.

The agreements had already been described by South Korean officials as necessary for pushing forward inter-Korean relations.

The South Korean ambassador to Egypt said the situation had been tense for North Korea’s neighbours, as well as the US, which has been pushing for a commitment to denuclearisation from North Korea.

North Korea announces it will halt nuclear, missiles tests ahead of historic summit with Trump

North Korea ‘may be close to nuclear test’ warns Seoul