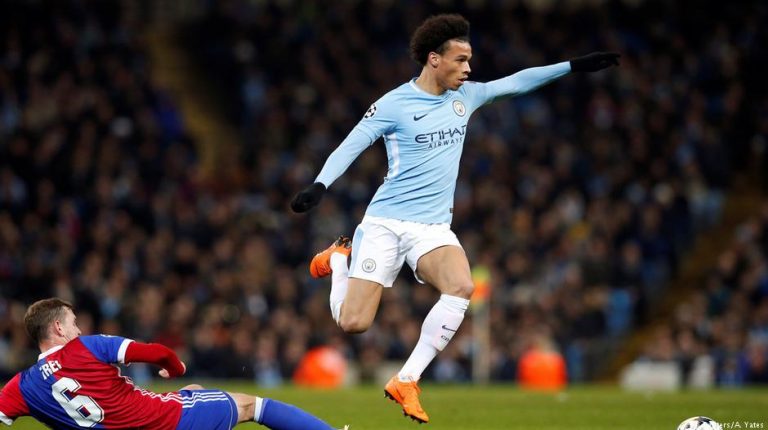 Manchester City winger Leroy Sané has been named the English Professional Footballers’ Association Young Player of the Year. His next challenge should be snatching Julian Draxler’s Germany starting spot at the World Cup.Germany’s Leroy Sané has been rewarded for a stellar season at English Premier League champions Manchester City by being recognized by his peers as the best young player in England — becoming the first German to win a PFA award.

The Professional Footballers’ Association award, one of the most prestigious in the English game, is richly deserved after the ex-Schalke winger terrorized defenses with his pace, trickery and powerful shooting.

The 22-year-old beat off competition from Tottenham Hotspur goalscoring genius Harry Kane and Manchester United’s Marcus Rashford for the young player gong, partly because his displays led to trophies — namely the Premier League title and the League Cup.

The only blot on his copybook was a low-key performance in the first leg against Liverpool as City crashed out of the Champions League quarter-finals.

But one off-game doesn’t not ruin a wonderful season and Sané should now be looking ahead to the World Cup with glee.

He has a very strong chance of making the Germany starting XI in Russia in June and July given the lefthand side is one area where Joachim Löw may look to make changes.

Julian Draxler has rarely featured for Paris St Germain this season and although he is a favorite of the Germany coach, his place must be at risk given the campaign Sané has enjoyed.

Sané also brings a youthful exuberance and verve which is slightly lacking in the rest of the world champions’ squad.

If we accept the team will Neuer (if fit); Kimmich, Boateng, Hummels, Hector; Khedira, Kroos; Müller, Özil, Draxler/Sané and Werner it is easy to see why the left-wing spot is the only berth really up for grabs.

The only issue which might count against Sané is that he missed the Confederations Cup last year, effectively Löw’s audition for spare spots in the World Cup squad and first-team aspirants.

He was named in the squad but pulled out to undergo a nasal operation, even though it was not an emergency.

“I would really like to have been in Russia (for the Confed Cup),” Sane told the German FA’s (DFB) website at the time. “I have decided, after a conversation with my doctor, to use the summer break for this operation, so that I can start the new season without any discomfort.”

Whether this decision counts against him for the World Cup, only Löw will know. Sané will surely be in the squad and if he takes his PFA young player award with him to Russia, it will give the coach a big nudge.