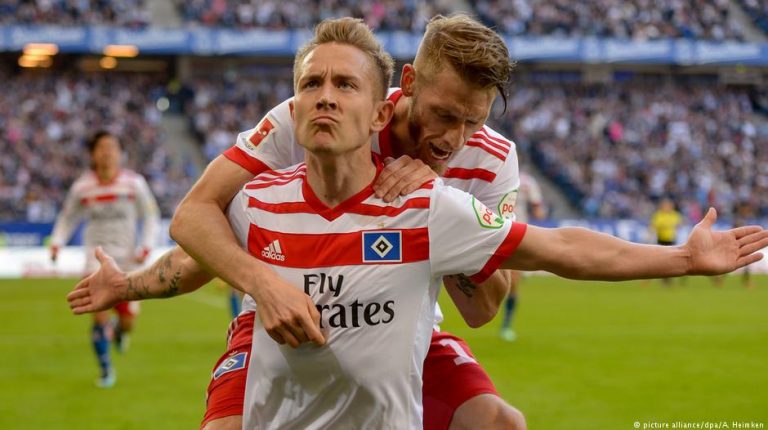 A narrow win over Freiburg has given Hamburg hope of yet another dramatic escape. Elsewhere, Borussia Dortmund bounced back from last week’s derby defeat with a convincing win over Leverkusen, while Bayern beat Hannover.Hamburg 1-0 Freiburg
(Holtby 54′)
Volksparkstadion, Hamburg

It’s surely impossible. Hamburg can’t save themselves again. Or could they? A second-half strike from Lewis Holtby gave HSV a vital three points against direct relegation rivals Freiburg, to move them to within five points of the Black Forest team with three games to play. Freiburg’s Caglar Söyüncü was sent off for a second yellow card before goalkeeper Alexander Schwolow fired over in injury time after coming up for a free-kick. The dinosaur isn’t extinct yet.

Julian Nagelsmann’s team gave themselves a huge boost in their battle to reach the Champions League with a comprehensive dismantling of RB Leipzig. Read more on that one here.

Borussia Dortmund bounced back from their disappointing derby defeat at Schalke last week with an attacking performance against high-flying Bayer Leverkusen. English youngster Jadon Sancho was the star of the show, opening the scoring and setting up another two goals for Marco Reus. Read the full report on that one here.

Eintracht Frankfurt experienced a crashing comedown after their midweek DFB Pokal heroics as a 3-0 defeat at home to Hertha Berlin put a dent in their European ambitions. Davie Selke gave the visitors the lead from the spot after being brought down by Makoto Hasebe. Mathew Leckie doubled the capital club’s advantage after being fed through on goal by Salomon Kalou, before Alexander Esswein capped off the afternoon in injury time. A bad afternoon got worse for the hosts when Hasebe was sent off after lashing out at Selke.

Mission accomplished for Tayfun Korkut as VfB Stuttgart secured their Bundesliga status with a 2-0 home win over Werder Bremen. Christian Gentner gave the Swabians an early lead with a header from Emiliano Insua’s cross before Berkay Özcan made the points secure in injury time. After four wins in five, Werder are now without a win in three – and still have Dortmund and Leverkusen to come.

Jupp Heynckes made seven changes to the full-strength team which won 6-2 in Leverkusen in the week, including a debut for 18-year-old Lars Lukas Mai, who became the first player born this millennium to start a Bundesliga match for Bayern. The changes appeared to have a negative effect in a first half in which Hannover came close to opening the scoring, and Bayern had Sven Ulreich to thank that it remained goalless at halftime.

In the second half, substitutes Thomas Müller and Robert Lewandowski combined as Bayern went up through the gears, before Sebastian Rudy scored his first Bayern goal to round off a straight-forward win, as Bayern look ahead to Real Madrid on Wednesday.

88′ GOAL! RB Leipzig 2-5 Hoffenheim (Upamecano)
A consolation goal for RB, not that many are left in the former Zentralstadion to see it. Upamecano taps home Lookman’s cross.

88′ — Hamburg are pressing for a second here as Aaron Hunt shoots over.

78′ RED CARD FOR FRANKFURT – Hasebe
What a comedown for Eintracht after Wednesday’s cup heroics. Similar to Forsberg in Leipzig earlier, Hasebe lashes out at Davie Selke and he’s off.

70′ — RED CARD FOR FREIBURG – Söyüncü
The Turkish defender brings down Kostic on the halfway line – a professional foul and a second yellow card. Kostic falls theatrically but Christian Streich can have no complaints.

65′ GOAL! RB Leipzig 1-5 Hoffenheim (Rupp)
Well, well, well, this is not what the locals signed up for when they decided to support a brand new team a few years ago, and they’re heading for the exits. Lukas Rupp stabs home Hoffenheim’s fifth.

59′ GOAL! RB Leipzig 1-4 Hoffenheim (Uth)
Any hope that may have restored is quickly extinguished as Mark Uth nods home for his second of the afternoon.

58′ GOAL! RB Leipzig 1-3 Hoffenheim (Baumann o.g.)
Substitute Naby Keita cuts inside and hits a powerful shot which comes back off the post and then richochets in off the diving Baumann.

57′ GOAL! Hannover 0-1 Bayern (Müller)
Substitute Thomas Müller places a volley into the bottom corner from Juan Bernat’s cross – although Bernat did appear to be offside when he received the ball on the left. No intervention from VAR.

54′ GOAL! Hamburg 1-0 Freiburg (Holtby)
The dinosaur isn’t extinct yet! Lewis Holtby dances through the Freiburg defense and stabs home to give HSV the lead! They couldn’t … they couldn’t …. surely not.

47′ — RED CARD FOR RB LEIPZIG – Emil Forsberg
It goes from bad to worse for RB. Forsberg is put under pressure, and probably fouled, by Florian Grillitsch but the Swede then lashes out at the Hoffenheim man. It doesn’t look like he actually makes contact but Grillitsch drops to the floor as if he’s just been shot. An unnecessary reaction but it doesn’t excuse Forsberg who is shown a straight red.

But Bayern haven’t found a way to break down Hannover … yet.

45′ — GOAL! RB Leipzig 0-3 Hoffenheim (Kaderabek)
Pavel Kaderabek nips in at the front post to convert Mark Uth’s cross and Hoffenheim have three! RB Leipzig are all over the place defensively, and Hoffenheim are knocking on the door of the Champions League again.

35′ — GOAL! RB Leipzig 0-2 Hoffenheim (Gnabry)
Another loss of possession from RB leads to another Hoffenheim goal. This time, it’s Orban who loses out to Uth who feeds his striker partner Gnabry to make it 2-0.

30′ — Chances for Hannover against Bayern! First, Bernat does well to block a shot from Füllkrug, before Ulreich stretches to tip Hübers’ free-kick wide.

27′ — Almost a second goal for Stuttgart. Gomez spins in the box but his shot rolls just wide.

19′ Frankfurt hit the crossbar! Jovic lays back to Gacinovic whose shot cannons down off the bar and out. Hertha living dangerously here.

14′ — GOAL! RB Leipzig 0-1 Hoffenheim (Uth)
Bruma is caught in possession by Serge Gnabry and Hoffenheim break. Nico Schulz’s low effort is spilled by Gulacsi and Mark Uth is on hand to tap home the rebound.

13′ — GOAL! Stuttgart 1-0 Werder Bremen (Gentner)
Insua crosses from the left hand side and Gentner beats his marker to head home from close range.

9′ — Huge chance for Luka Jovic in Frankfurt. The ball falls to the cup hero inside the Hertha box but he fires just over.

9′ — First proper opening for Hamburg as Ito plays in Waldschmidt but his dangerous ball across the face of goal finds no-one.

— Following their dramatic DFB Pokal semifinal win over Schalke in midweek, Eintracht Frankfurt’s attention returns to the Bundesliga, where qualification for the Europa League is still possible. The Eagles are unbeaten in eight home league games and welcome Hertha Berlin:

— Hamburg have been granted licences for both the Bundesliga and 2.Bundesliga next season, and haven’t quite given up hope of surviving the drop yet again. But history is against them:
– Eight points separate the Northerners from Freiburg – the biggest gap after 30 games since the introduction of three points for a win.
– Victory would narrow the gap to five points, but no Bundesliga team has ever made up an eight-point difference in the final four games of the season.

— Lars Lukas Mai joined Bayern’s youth academy from Dynamo Dresden in 2014 and now becomes the first player born in this millennium to start for Bayer Munich. He’s made one appearance for Bayern’s reserves in the fourth-tier Regionalliga this, but has played the majority of his football in the club’s A-Junior side.

— With the Bundesliga title already wrapped up and the Champions League semifinal coming up on Wednesday, it’s another “B” team for Bayern Munich away at Hannover – if that even exists, given the quality at Jupp Heynckes’ disposal. 18-year-old defender Lars Lukas Mai makes his debut for the Bavarians at right-back.

— Today, we have two big games at both ends of the table. Down the bottom, Hamburg have another must-win as they welcome fellow strugglers Freiburg. At the top, RB Leipzig welcome fellow Champions League challengers Hoffenheim, a match Julian Nagelsmann has described as having “the characteristics of a final.”

— Guten Tag! The sun is shining and we’re looking forward to Matchday 31 in the Bundesliga —