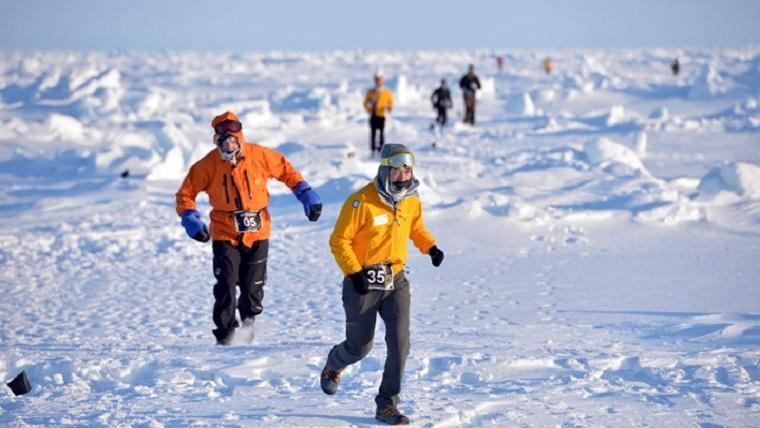 Over 60 athletes from over 20 nations, all vying for glory, took part in the 2018 edition of the annual North Pole Marathon which took place at Camp Barneo on Tuesday.

The marathon, known as the “world’s coolest marathon,” took place at Camp Barneo, which is dubbed the North Pole Camp, and is located 49 km from the northernmost point of the world

The harsh marathon requires competitors to run a 4.22-kilometre loop, for about 10 times, over hard snow or ice. Meanwhile, competitors participating in the half marathon ran five loops.

Marathon runners braved conditions of almost -33 degrees Celsius, in addition to struggling with soft snow and small ice pressure ridges all through the route.

Once Greek runner Argyrios Papathanasopoulos passed the finish line to become the marathon’s winner, fell to his knees from exhaustion, holding the Greek flag in one hand with his face covered in ice.

“Almost unbelievable. You know, I’m a Greek guy, so this is not the right place for me; it’s like an Eskimo running a race in the desert,” he said after completing the marathon in four hours, 34 minutes, and 36 seconds.

On the other hand, Gouping Xie of China secured the top spot against 13 female runners.

The marathon was full of oddities; one of them was how the Australian runner Marcus Fillinger completed the race. Despite falling to 41st place, he was accompanied by two husky dogs, Druro and Blue, who become the first canines to complete the marathon.

Meanwhile, a British runner named Ted Jackson was seemingly almost completely transformed into a Yeti, with his moustache and beard all covered with snow and ice, as a result of his sparse attire, as he managed to complete the course in just thin running gear and a woolly hat.

The 2018 Winter Olympic Games wrap up with colorful closing ceremony