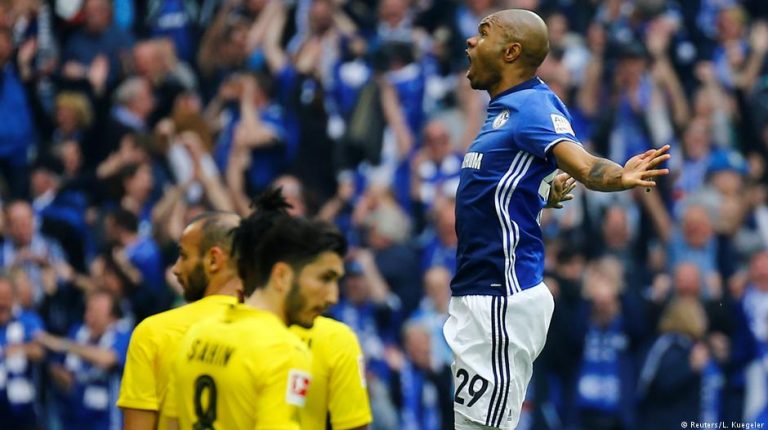 A Naldo hammer, a hat trick and a trio of German youngsters daring to win a spot on the plane to Russia this summer. From facts to quotes, here’s all you need to know from Matchday 30 in the Bundesliga.Good week for: Kevin Volland, Bayer Leverkusen, Sandro Wagner, Hoffenheim, Domenico Tedesco, Schalke

— Hoffenheim have hit form at the right time of the season. With a 2-0 win against Hamburg, the club jumped up to fifth and now lead the chasing pack of teams hoping to finish in a European spot. Behind them, albeit only on goal difference, are Frankfurt and RB Leipzig. For all the criticism Julian Nagelsmann received after the club’s poor showing in Europe, he has got them back on track and finishing the season strongly.

— Even though they won the title last weekend, Bayern Munich still found time to sweep Gladbach aside by five goals to one. Bayern have now scored 81 goals this season, and have collected 24 wins in 30 games. Given that it’s mid April, this is the perfect time for the side to be reaching top form.

— Both Hamburg and Cologne only have themselves to blame for not surviving. Both sides missed another chance to keep their slim hopes alive, with Hamburg fortunate to escape Sinsheim with just a 2-0 defeat. Cologne, on the other hand, threw away a lead to fall to defeat in Berlin. Both sides need a miracle to survive now.

— Schalke deservedly beat Borussia Dortmund at home in the derby. After a spirited first half, Schalke scored twice in the second half as Dortmund collapsed in a hugely disappointing derby display. Peter Stöger looked like a man without a plan, and things were made worse when Michy Batshuayi was stretchered off having rolled an ankle late on. Dortmund’s Champions League hopes hang in the balance, but Schalke look set to return Europe’s elite stage next season.

— Though it came in an odd fashion, Mainz secured a very important win over Freiburg on Monday as they attempt to stay in the Bundesliga. Pablo De Blasis came up big for the home side, converting from the spot in the first half and scoring on an open goal in the second. Mainz are now level on points with Freiburg and Wolfsburg with four games to play, all three hoping to avoid the relegation playoff spot.

— After their 2-0 win against Hamburg, Hoffenheim have now gone seven games without defeat (three draws, four wins). They have scored 18 goals and conceded just five in that time.

— For the first time in his career, Sandro Wagner scored in his fourth consecutive Bundesliga game.

— David Alaba’s goal in the 5-1 win against Gladbach was the first of his career with his right foot.

— Schalke have kept six clean sheets in their last seven and secured their first derby win since 2014, and their first by two or more goals since 2007.

— Naldo’s swerving free kick crept up to 126 km/h before hitting the back of the net. That is moving. It was also his 6th goal against BVB, more than he has managed against any other Bundesliga team. Naldo now has seven goals this season, equalling the most he has scored in a season since 2014/15.

“Should I lie, and say that it didn’t? Of course, we are people not robots.” Eintracht Frankfurt goalkeeper Lukas Hradecky when asked whether the intense media coverage around Niko Kovac affected the team’s performance in Leverkusen.

“The World Cup question is beginning to be annoying. You don’t ask [Mats] Hummels or [Thomas] Müller every week whether they’re going. I see myself the same way.” Sandro Wagner being himself.

“He scores so many goals, it’s incredible. I don’t think I’ve scored as many in training as he has in games.” Sandro Wagner with another classic quote.

“We don’t understand why this generous gesture has been thrown back at us like this.” Bayern Munich’s President Uli Hoeness on Fredi Bobic’s accusation.

“It was bitter that I made the mistake that led to the opening goal in this game of all games. I want to apologize to everyone who supports the club.” Dortmund captain Marcel Schmelzer after the derby defeat

After Franck Ribery (35) and Arjen Robben (34) have reportedly extended their contracts by one year, Brazilian defender Rafinha is close to agreeing one too. Kicker reported that the 32-year-old wingback will soon announce the one-year extension, likely made possible by Rafinha’s excellent performance as deputy to both David Alaba and Joshua Kimmich.

Marcel Sabitzer is out for the rest of the season with a shoulder injury that requires surgery, RB Leipzig confirmed late on Sunday. Michy Batshuayi will likely miss the rest of the season with an ankle injury, BVB confirmed Monday. A World Cup remains possible, though. Unlikely to see Batshuayi in yellow and black again, which is the biggest shame.

While Borussia Dortmund vs. Schalke is a game German police mark out on the calendar as one that requires extra precaution, some strong measures were taken by the police for Saturday’s game. The third train filled with Borussia Dortmund fans going to Gelsenkirchen was followed by a helicopter. In the end, no trouble between fans was reported.